Acknowledgement:
All of this stuff would not have been possible without work and/or help from
Harry Palmer (ignited my interested in DOA5 modding, provided excellent tutorials and nude mesh/textures)
Holden/Galhound/Follardo (for the wonderful bushy/HDR texture packs)
Lilstormcloud/Protocol X27 (for tutorials and help with general modding)
Mr. Dotouku (for the wonderful tool suite)
Sf234 (for texture and DLC tools)
Support from my friends - SaafRats, Siframe, Digitalcookie(my beta tester

), and many many more friends here on LL.

If you are having issues installing any of my mods, please take a moment to go through [DOA5LR] A Few Modding Tools | Undertow for a collection of tools put together by

Here are some of my earlier mods that have yet been made public here.

Most of my mods are crude and are proof of concept creations that are basically meant as beta tests for my tools. As such, they lack any polish any modder with self respect would consider "publishable" and some of them just plain suck, so use at your own risk. I also have very poor skills with 3d modeling software as I had not touched it prior to starting DOA5 modding, so you have been warned.

It contains:
Curiosity pack (06/10/15*) - this is one of the earliest test mods I did when I managed to inject correct normal vectors back into TMC. This is for Kasumi with a heart shaped icon from Harry.
MilkPlus angelic/demonic (06/23/15*) - Angelic is the shaved version and demonic is the bushy version. I think they both occupy slot 35, so they can't co-exist. This pack contains 15 ladies with custom made icon. I think the name is self explanatory

RealPhysicsSeries beta (07/07/15*)- Screenshots of this can be found in screenshots thread. This pack contains outfit for Kasumi, Ayane, Leifang, Hitomi & Pai.
XmasInJuly (07/15/15*) - screenshots can be found in screenshots thread. There are some issues with animation on Hitomi which might bother some people. I forgot how many this one includes, but look for xmas clothing icons. Updated version 3.1 can be downloaded here [DOA5LR] Timmy's Private Stash, Tips & Tools (03/18/16 - converter 0.4.6 & transformer 0.2.6) | Page 9 | Undertow

*Added Original Creation Date to all of the above packs as an indication of how "complete" (or incomplete) they are. The earlier the date, the "rougher" the pack is

All of the above mods were created when no tools were available to allow direct editing of meshes. They were all created with an early version of my Advanced Converter as listed in the section above and represent significant investment as I had spent countless hours on research, coding, debugging and testing. I hope you will enjoy these packs as much as I have enjoyed creating them.


Real Physics Series - It never made any sense to me how girls could be fighting in this kind of outfits yet miraculously avoid wardrobe malfunction, so i took it in my own hands to correct the issue.

Xmas In July - girls found a creative way to maximize the jingling of their bells :) (they don't make any sound, though, I suspect these bells are cheap plastic knockoffs.) I remember when I was working on this pack, Jingle Bell Rock was stuck in my head.

Feast your eyes on the enhancement that defies all laws of physics
http://pan.baidu.com/s/1nt3T0A9
Who needs soft engine when we can get boobs that don't stop bouncing even when she's standing still.


I will probably expand the collection to include some of my more recent work once I get time to clean them up, and if there's any demand for those. I haven't really spent much time at all on DOA5 since a few weeks ago and only recently I picked up where I left off on the development of my tools to finish them, so at least my project is now complete instead of being left in an unfinished state.

I would appreciate it if these mods were not uploaded/repacked elsewhere.
Last edited: Aug 7, 2016

The screenshot attachments don't seem to be working. :(

I think I fixed them now.
E

Can you give more specific what are the numbers of your costumes ? I couldn't find it :( . (I used a lot of DLCs so maybe the costume was overwritten by another DLC)

I remember the milk plus uses 35. The other packs should occupy slots with number smaller than 35 if I remember correctly. You can check quickly with DLC tool to verify costume slot number.

A friend told me that Nyo isn't in the Xmas pack when she's in the screenshot. I realized I had her in a separate DLC that I use. Now I've included her in the updated xmas in july pack. Unfortunately now the song Jingle Bell Rock is stuck in my head again :(


I hope you guys are enjoying these mods as much as I have enjoyed creating them.
Last edited by a moderator: Aug 13, 2015

I had some discussion with a friend yesterday on weight assignment, and I took some time to check out the xmas in july pack that was made a while back when I still didn't have a good way to massively adjust that stuff. I realized how abysmal some of the weight assignments were and decided to take some time to modernize the pack a little bit. I have learned a few new tricks since the inception of this xmas pack in early July.

Change log -
Kokoro - now her outfit should move in a more synchronous manner with her chest.
Hitomi - This is a hard one to fix, but I think I made some decent improvements. There are still some issues with animation when her arms are close to her body since there's no suitable weight to assign to the dangling piece under her arm pit, but it's not too noticeable in action
Marie - Fixed the lifted shirt now the movement is more natural and are synchronous with her chest. No more weird lines across her chest that was visible in the old version.

I'm glad at least some of you seem to be enjoying these packs. Judging by the lack of response, I guess there isn't much interest in this old school stuff. Perhaps the interest in this game in general isn't there anymore.
Last edited by a moderator: Aug 14, 2015
J

Wow! Nice work! Thanks for sharing. I can't wait to try these...

Gud day Timmy. Is there a Xmas In July mod with no jingle bells? Like your mods. Tnx.
C

The download link seems to be dead. this looks great by the way, good job!

Does it work with the http://www.gamevixenzone.net/hot-stuff-21/doa5-lr-nude-mod-plus-costume-2199/ pack ?
Thanks !

Hey Timmy, just wanted to stop by and say thank you for all your efforts.

Also I hope we can work together in the future (when I learn a bit more).
3

just wanna say thanks for the RealPhysicsSeries, I really like it!

Hi
your site is very nice.
please help me
I downloaded these modes and copied them in the DLC folder of game but i didn't observe...
please help what should i do? should i download or install anythng?
Last edited by a moderator: Sep 17, 2015
A


I used Umod but didn't see anything
please answer soon


I used Umod but didn't see anything
please answer soon
Click to expand...

I haven't actually used this mod but from the looks of it it doesn't not use uMod. uMod is a tool to inject textures. You can see that these aren't just texture swaps. It looks like it may be using the DLC method.

yesss. thank you very much

Here's the Ayane costume I made a little while ago for fun while browsing. I saw one of Follardo's mods and came up with this idea.
I dusted it off yesterday and spent some time on fixing clipping issues. I think it's pretty playable now with no noticeable flaws in action.

Credits go to the usual suspects as stated in my acknowledgement section.

Try the "Nvidia fix" version if you are experiencing issues with a stray vertex from one of her toe nails.

Today I am sharing a mod that I helped a friend make about two weeks ago.

This mod is probably not what people are expecting - It is just a simple Costume replacement for Nyotengu COS001 which makes her bottomless with all the other parts intact. My friend was having issue figuring out a good way to attach the official model's legs to Harry's nude mesh.

The goal of this is to keep all else intact while exposing the private area. This presented a few challenges as the nude mesh's legs are a bit thicker than official Nyotengu model's legs as pictured below:

Using a "nearest vertex search" algorithm I have, I managed to repair the seam/gap to this point

There's still a stray vertex that doesn't quite match up with the official model, so I had to do a bit of manual adjustment, and this is what I got at the end:

The end result is a completely seamless and bottomless Nyotengu COS001 replacement. Follardo (on LL) has already released his own excellent renditions of these models with an extremely small gap here

It doesn't really affect game play, though. He used a very clever way to hide the gap to minimize distraction during game play. I will leave my version here since I had already spent time helping my friend with this leg seam issue, and I figured this could add another flavor to Nyotengu COS001. There are probably some people out there who appreciate bottomless models like this one.

Credit for texture: I used texture from sddklex (from 3dm) for the nude body which has the "openable" private zone texture for when her legs are spread. I think the effect is quite amusing

and is a sight to behold when she kicks high..

Just wanted to say thanks again all your hard work and can't wait to see what you release "Timmy-fied" with the new DLC content.

Also wanted to ask if it would be ok for me to release a "Naughty" or "Expanded" Remix of some of your work here?

Either in a new Topic linking back to yours -or- in this one if you prefer, since I've been toying with them lately.

(Also! kind of a copy-paste from what I had to say in your other Topic on another site, but wasn't sure which you visit most often now).

In light of this http://www.gamecity....ote_result.htmlresult, I figured Leifang is not getting enough attention she deserves as she is easily one of the hottest and my favorite DOA5 girls.

Here's a sample collection of what I have made for Leifang. Some of them are inspired by follardo's wonderful work, and they are all "ink reshuffle-able" which allows for quick and easy installation. 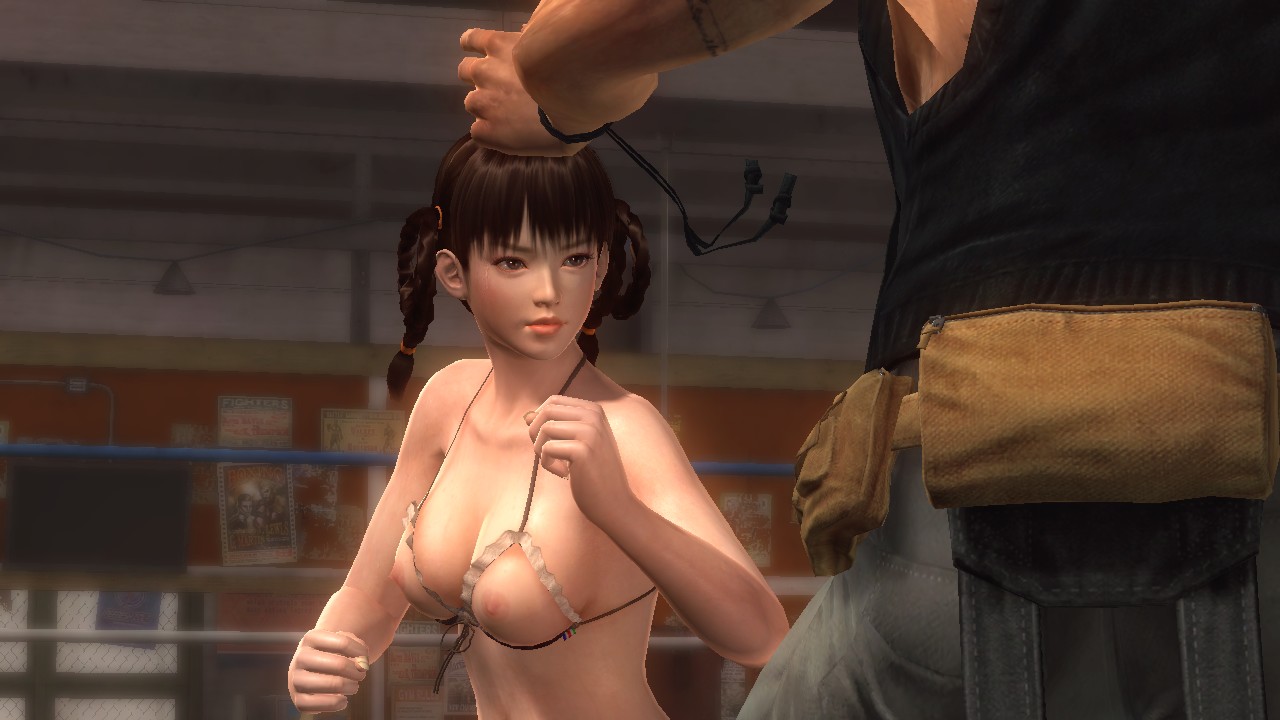 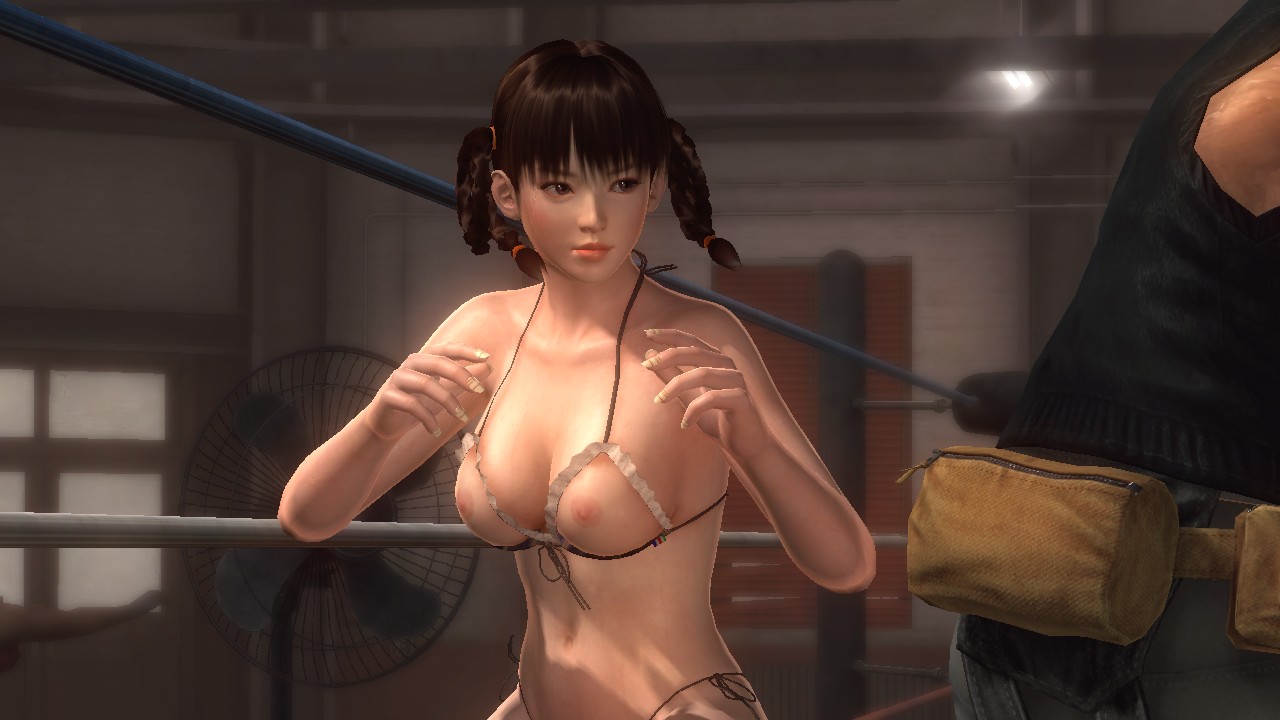 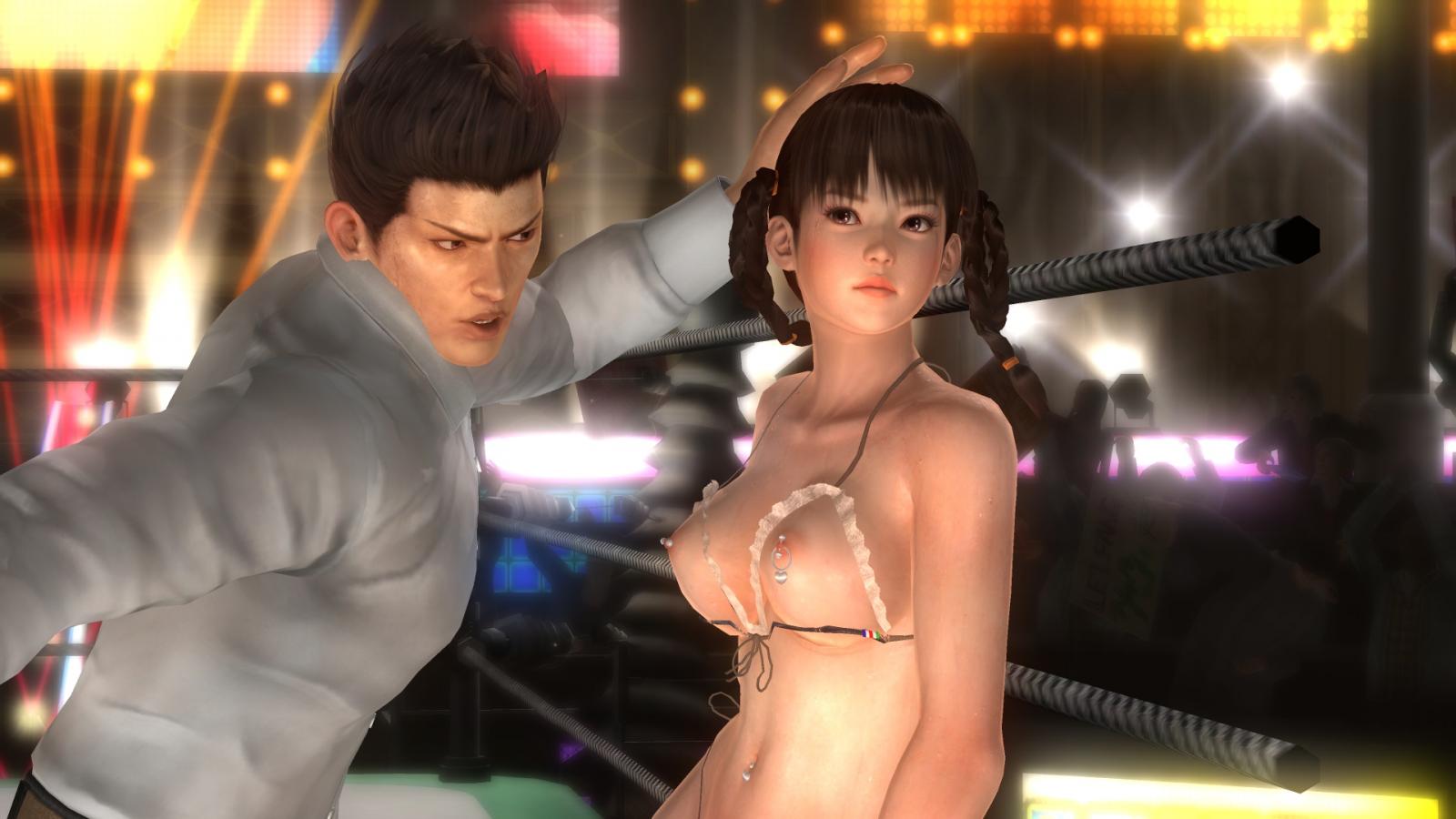 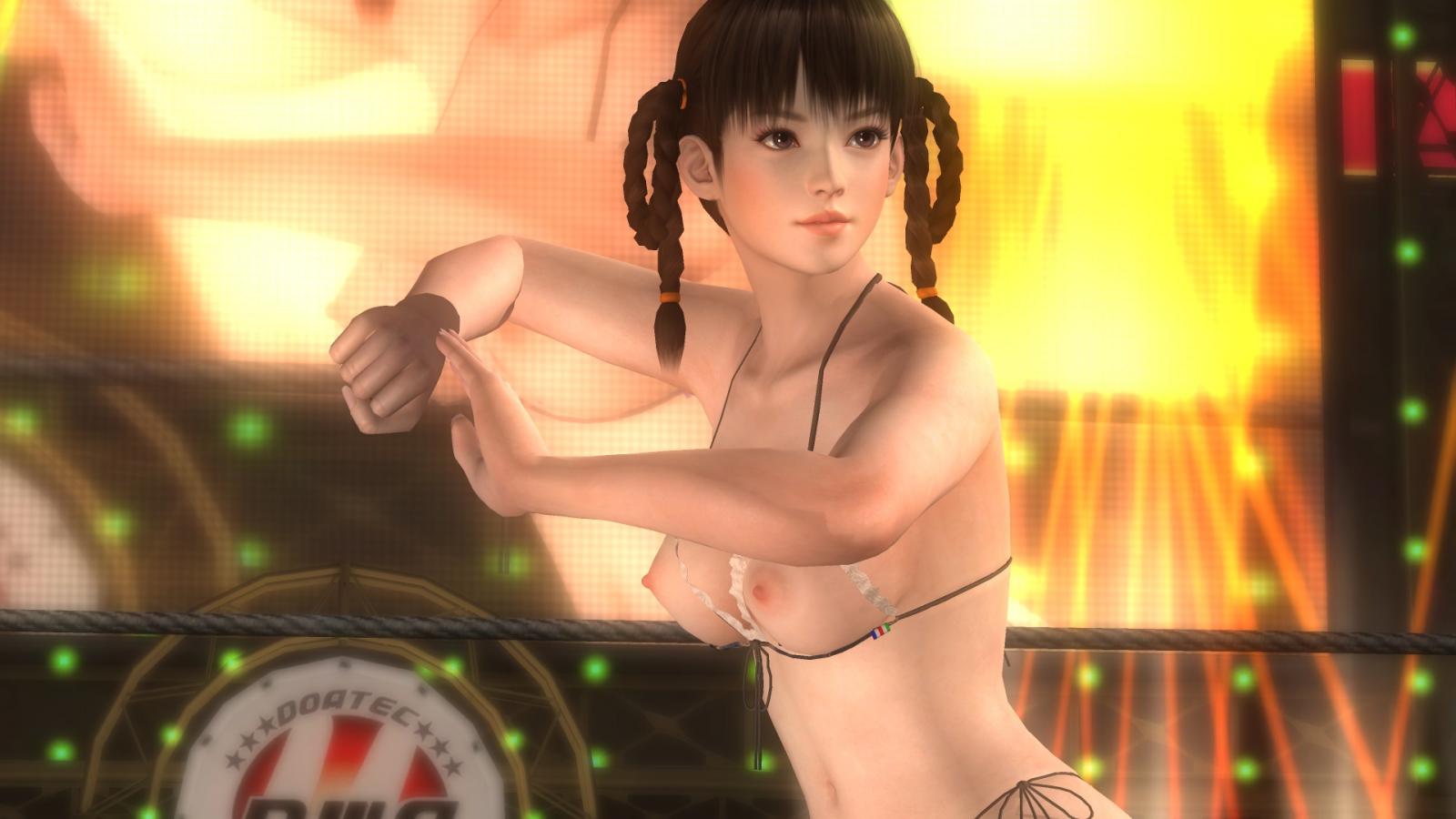 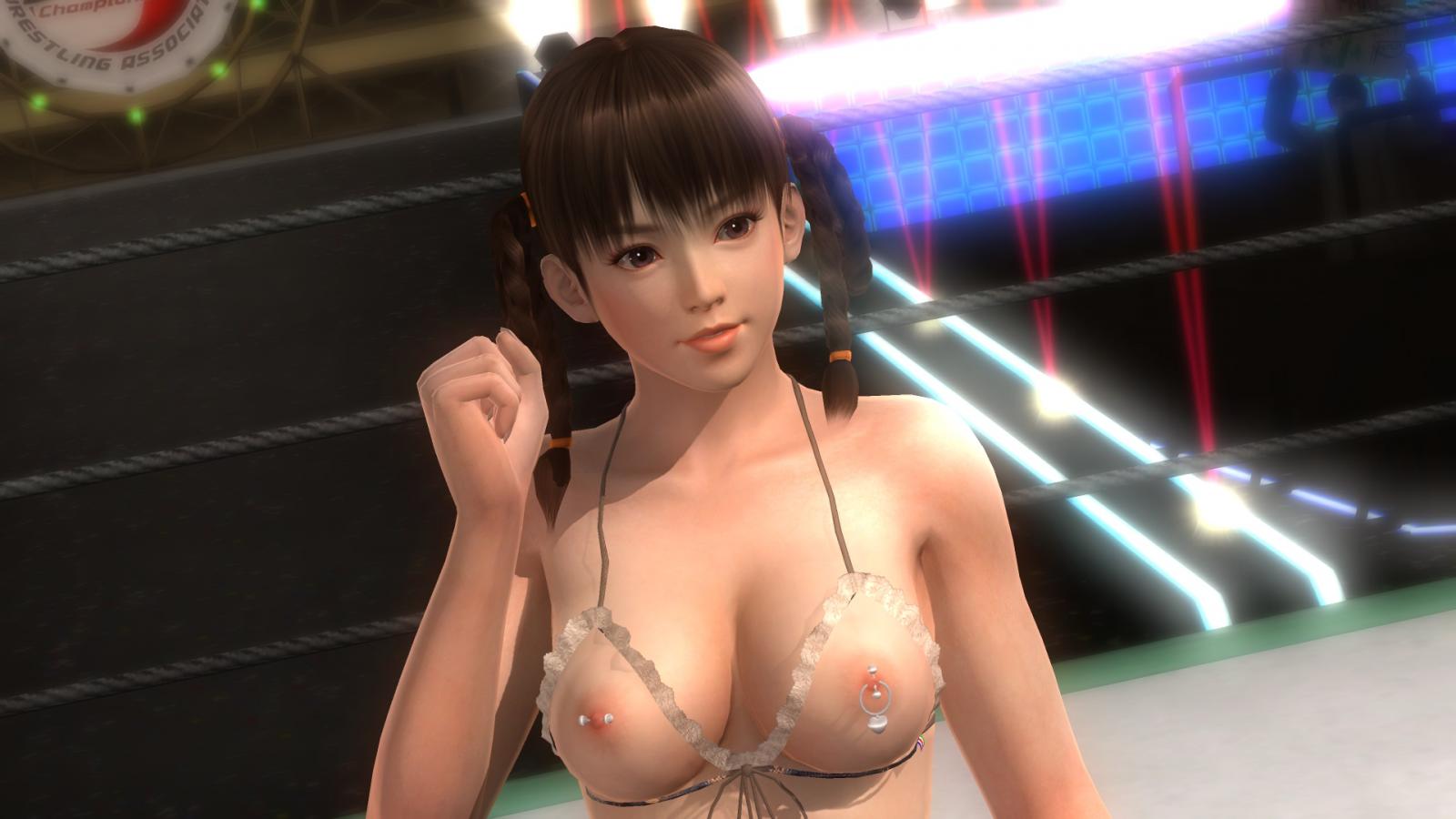 This one is based on Follardo's Cheerleader work. It saddened me to see Leifang missing from the pack, so I decided to add her back using Kokoro's model as base 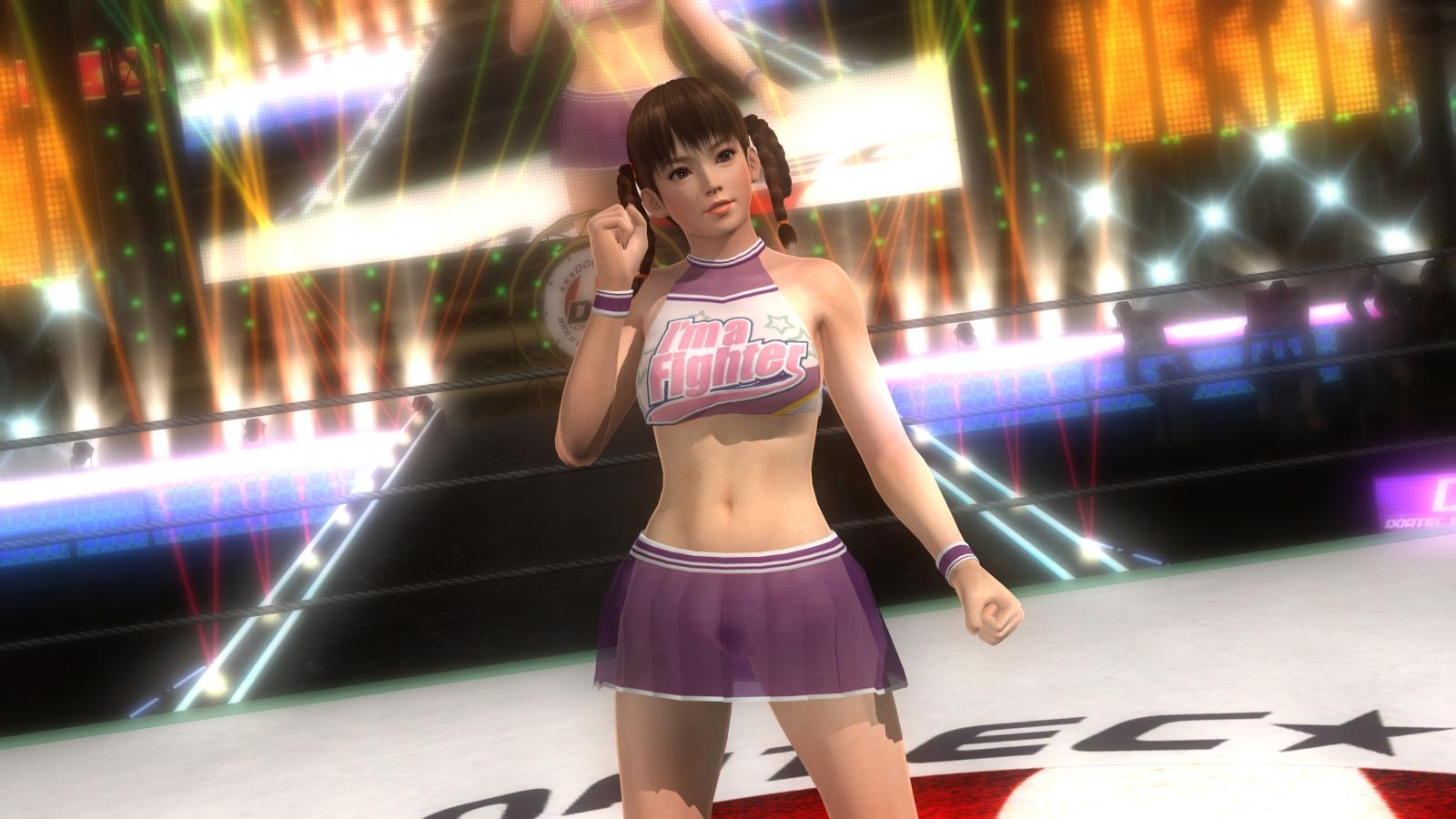 I took inspiration from Follardo's "jiangshi" modification and altered it slightly to put the scroll thingie on her crotch as to prevent her from awakening her true power....

Silly story aside, it took me quite a bit of time and creativity to anime the scroll since simply moving the scroll down there, the animation won't work at all. I think the result is quite nice. 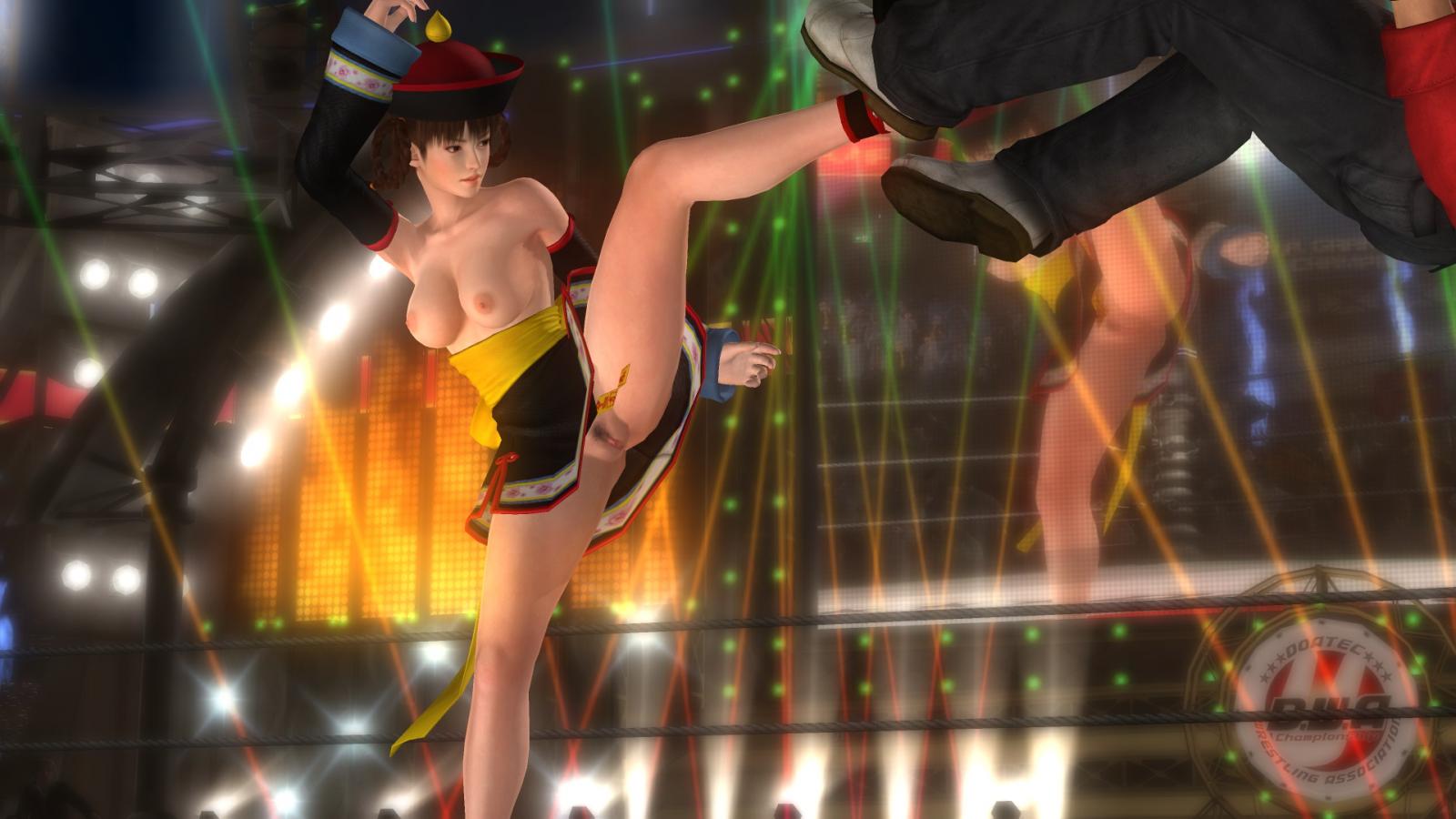 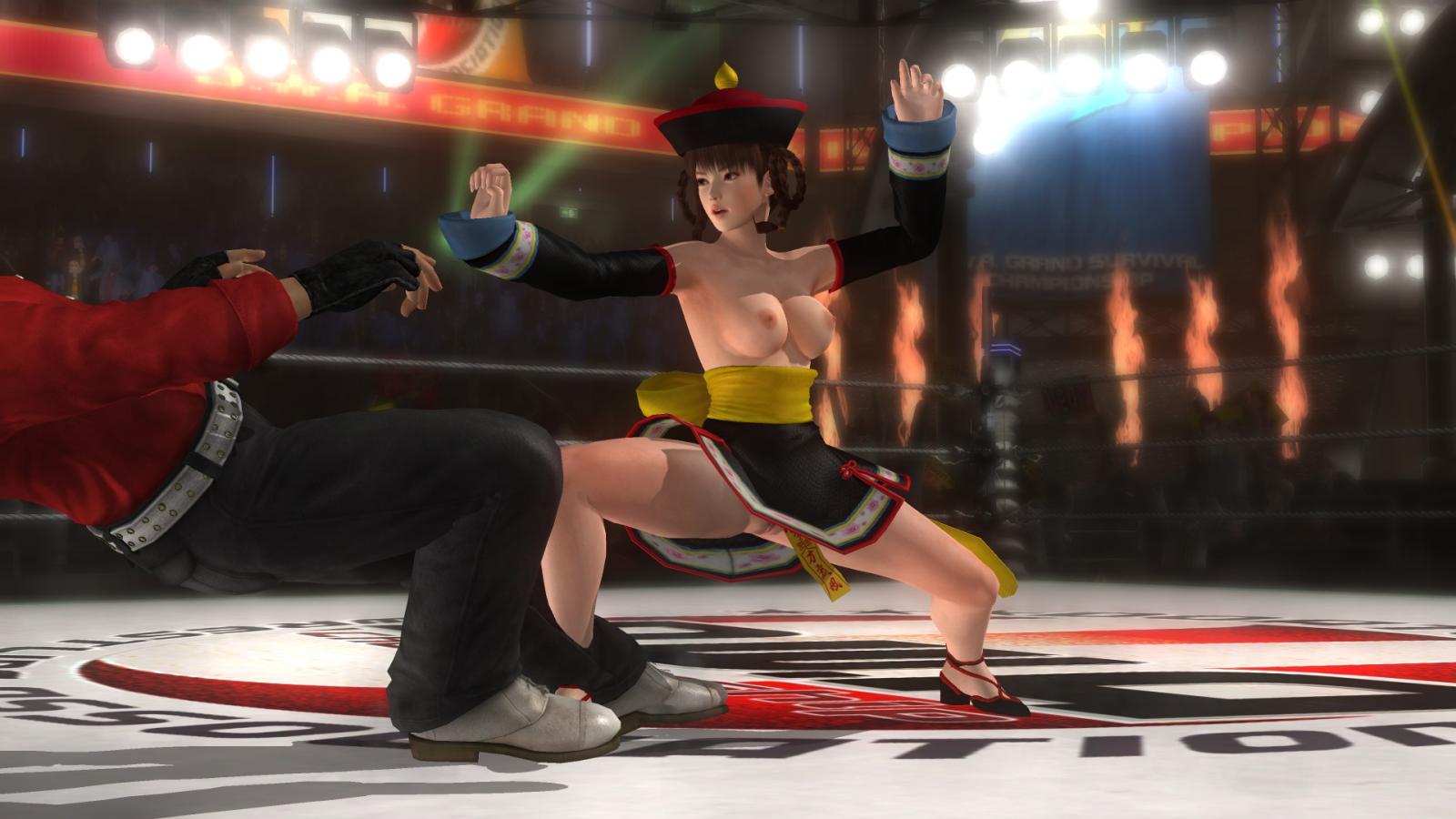 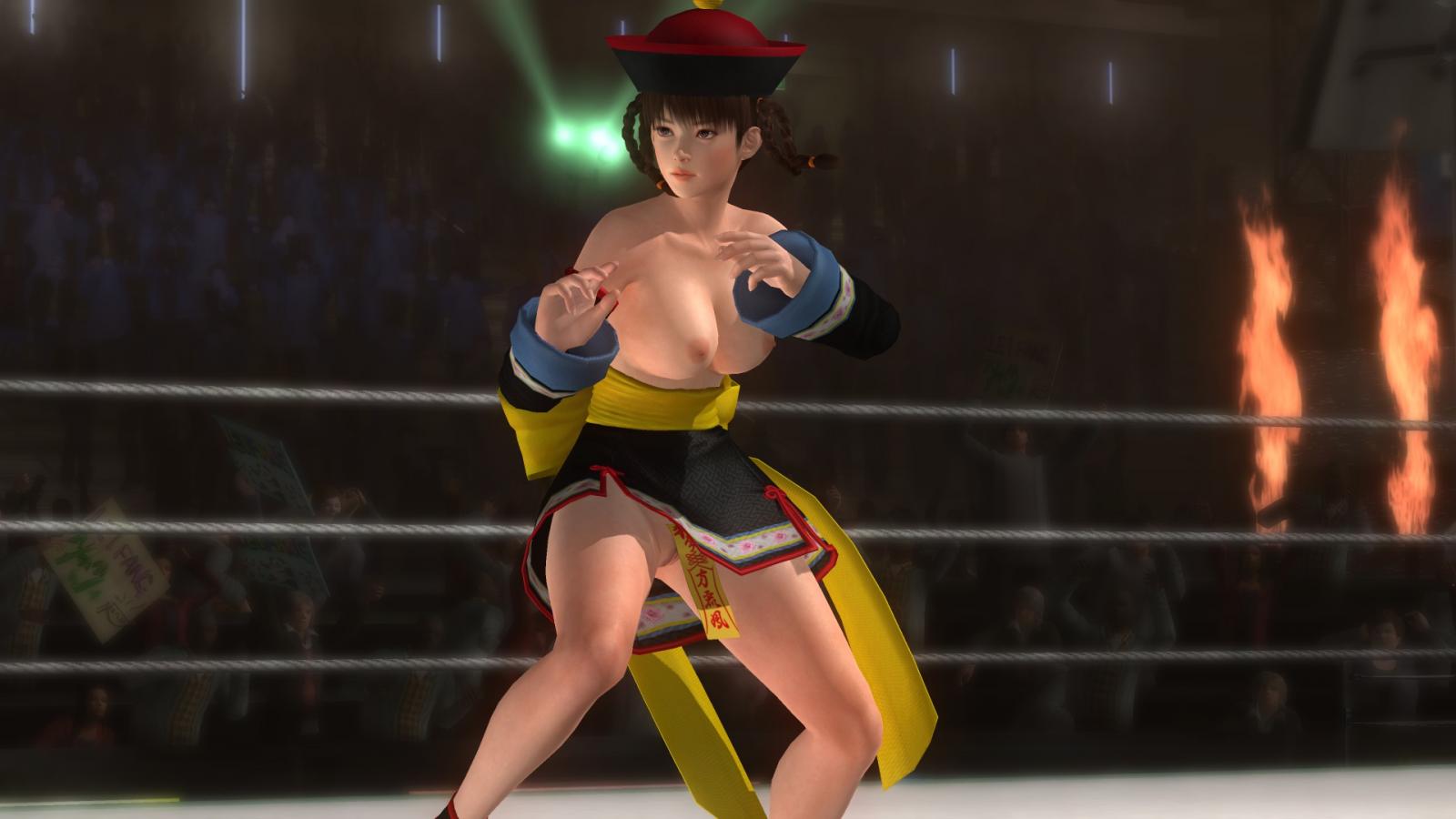 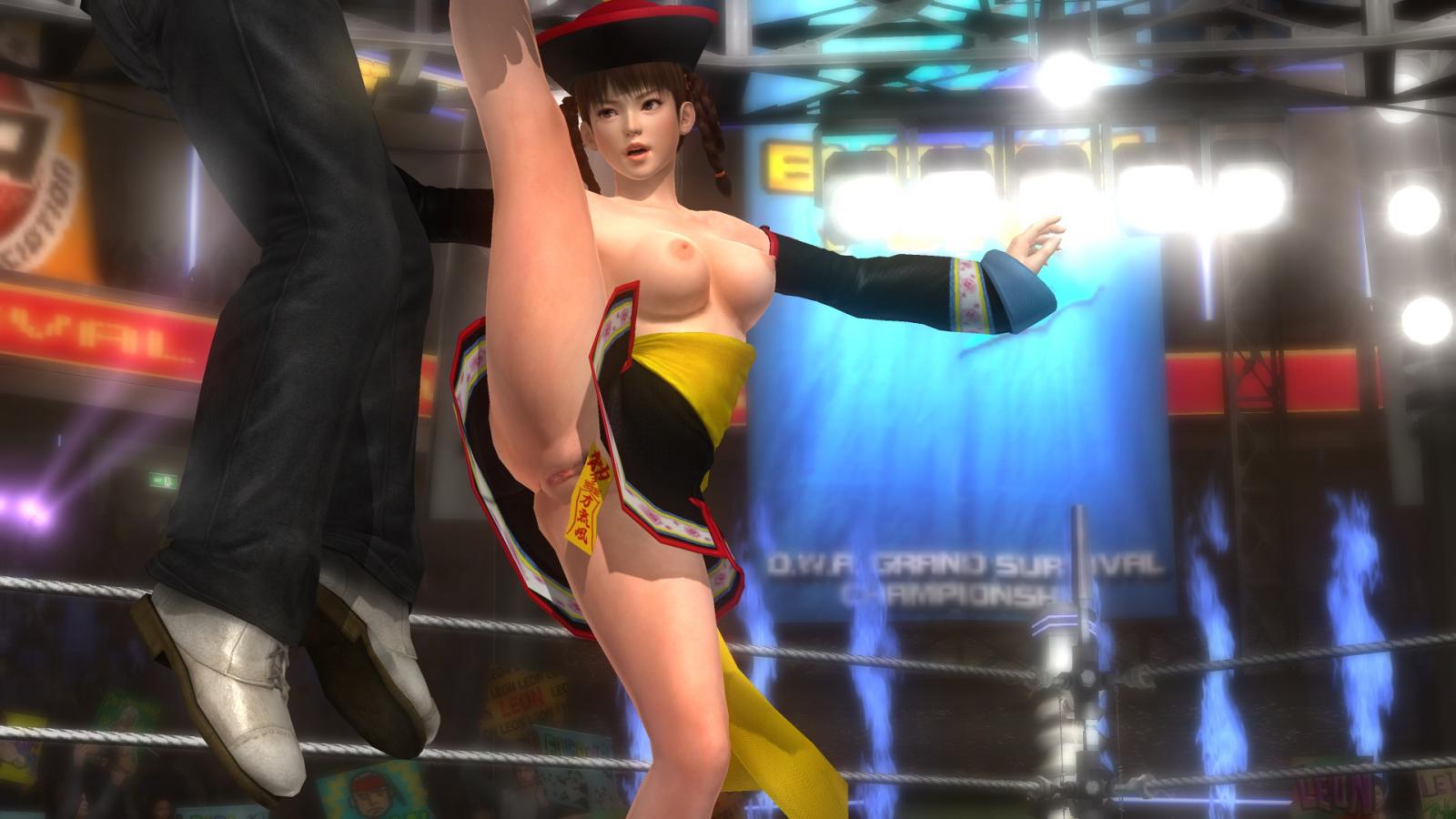 Yet another costume based on follardo's modification. I simply moved the bells after enlarging them and gave them some life, so they bounce around nicely with her breasts

It's a shame that there's no sound effect for those bells. I guess they are made of plastic like the ones in my Xmas pack. 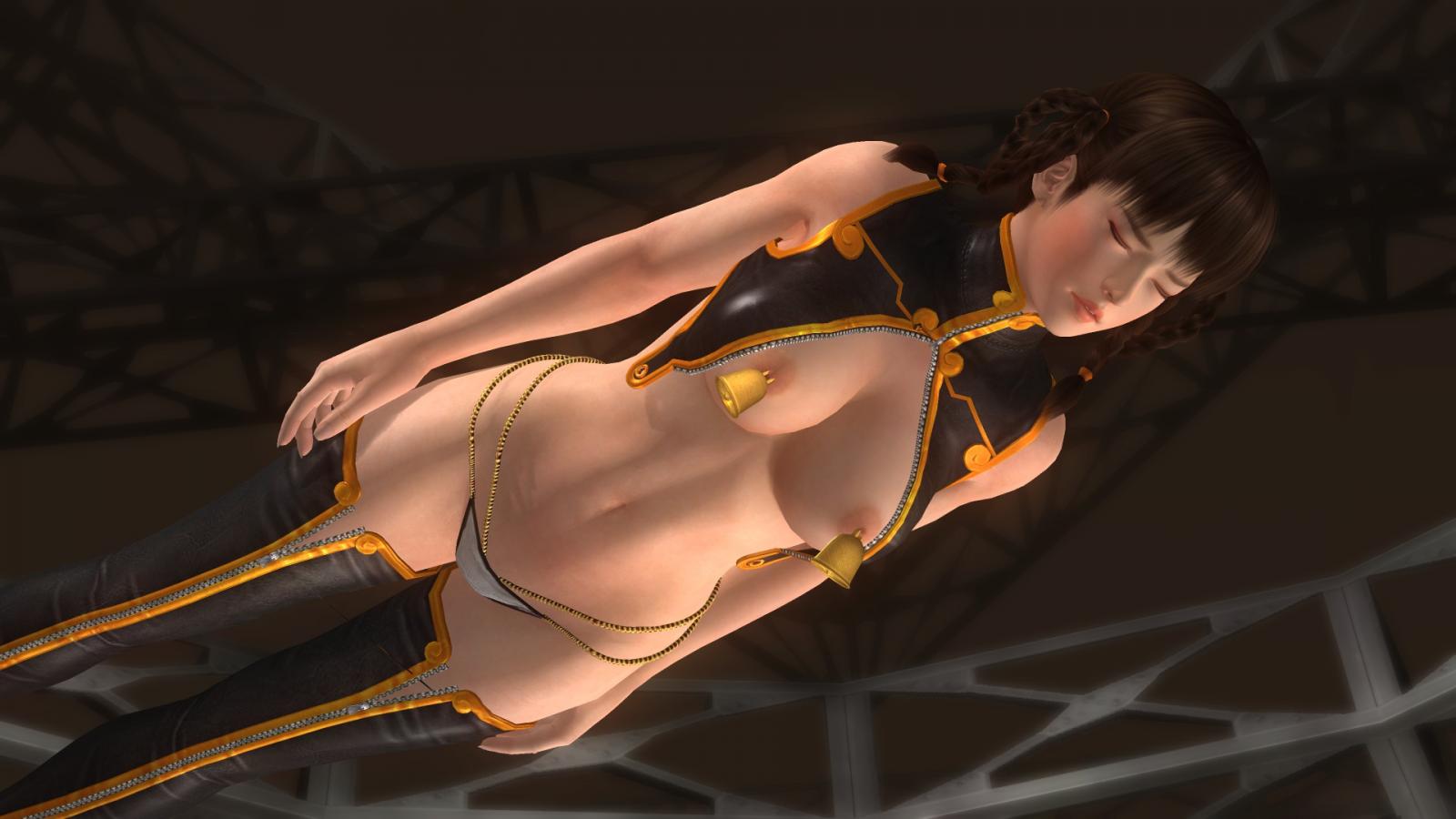 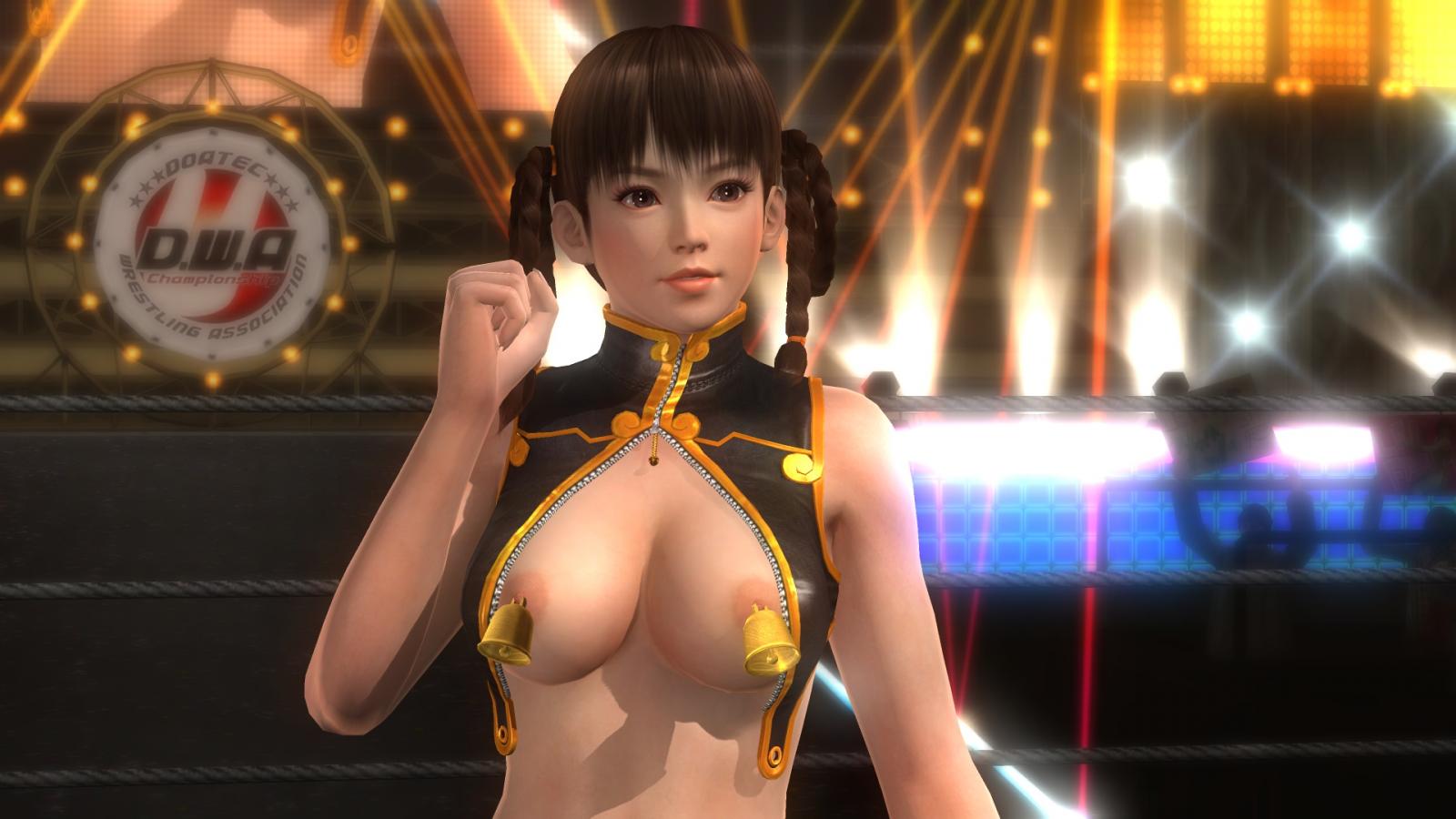 skin tight see-thru with bra Silhouette and mini skirt - minor clipping issues can be observed, but I think it's not noticeable in action. 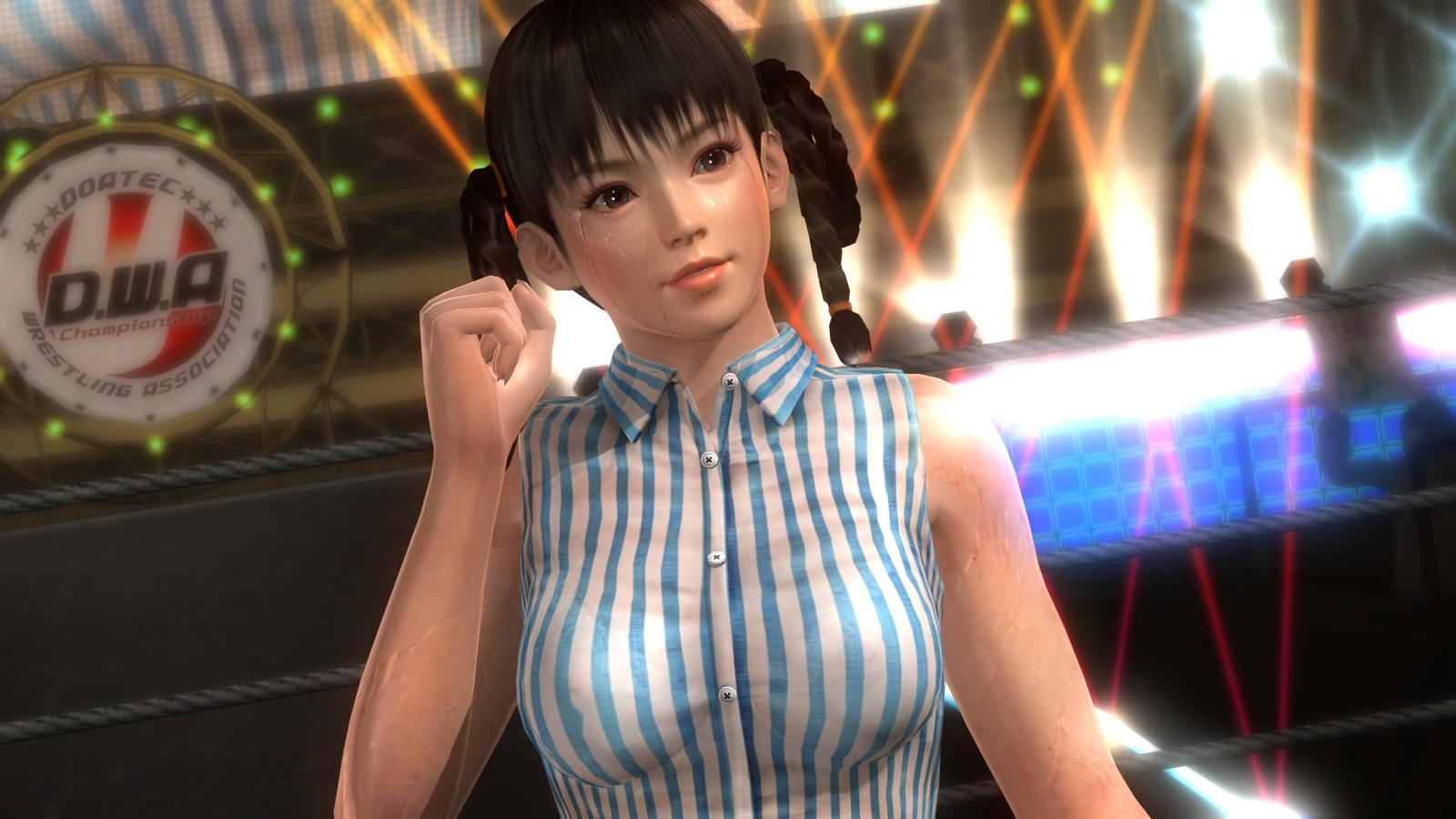 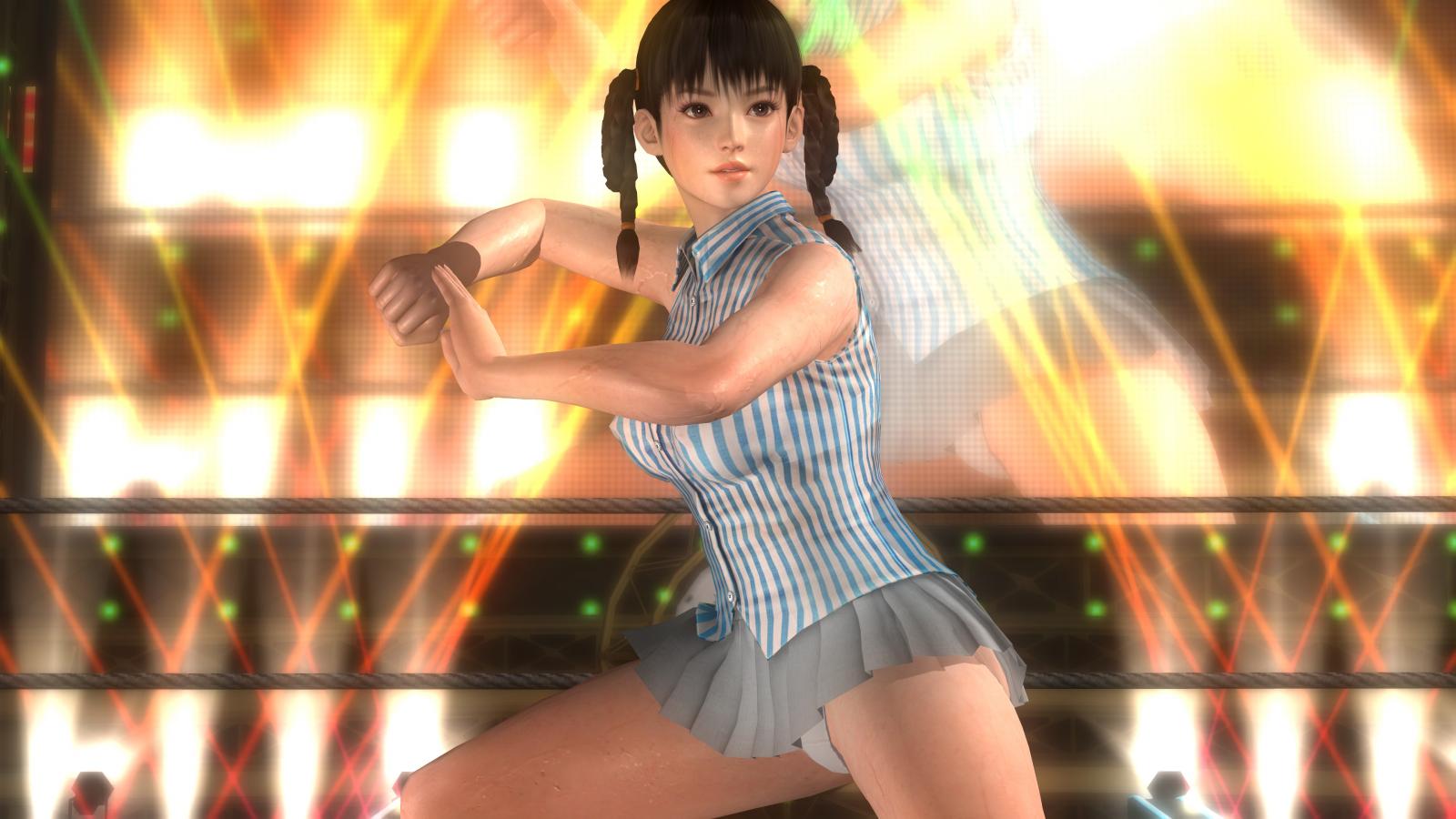 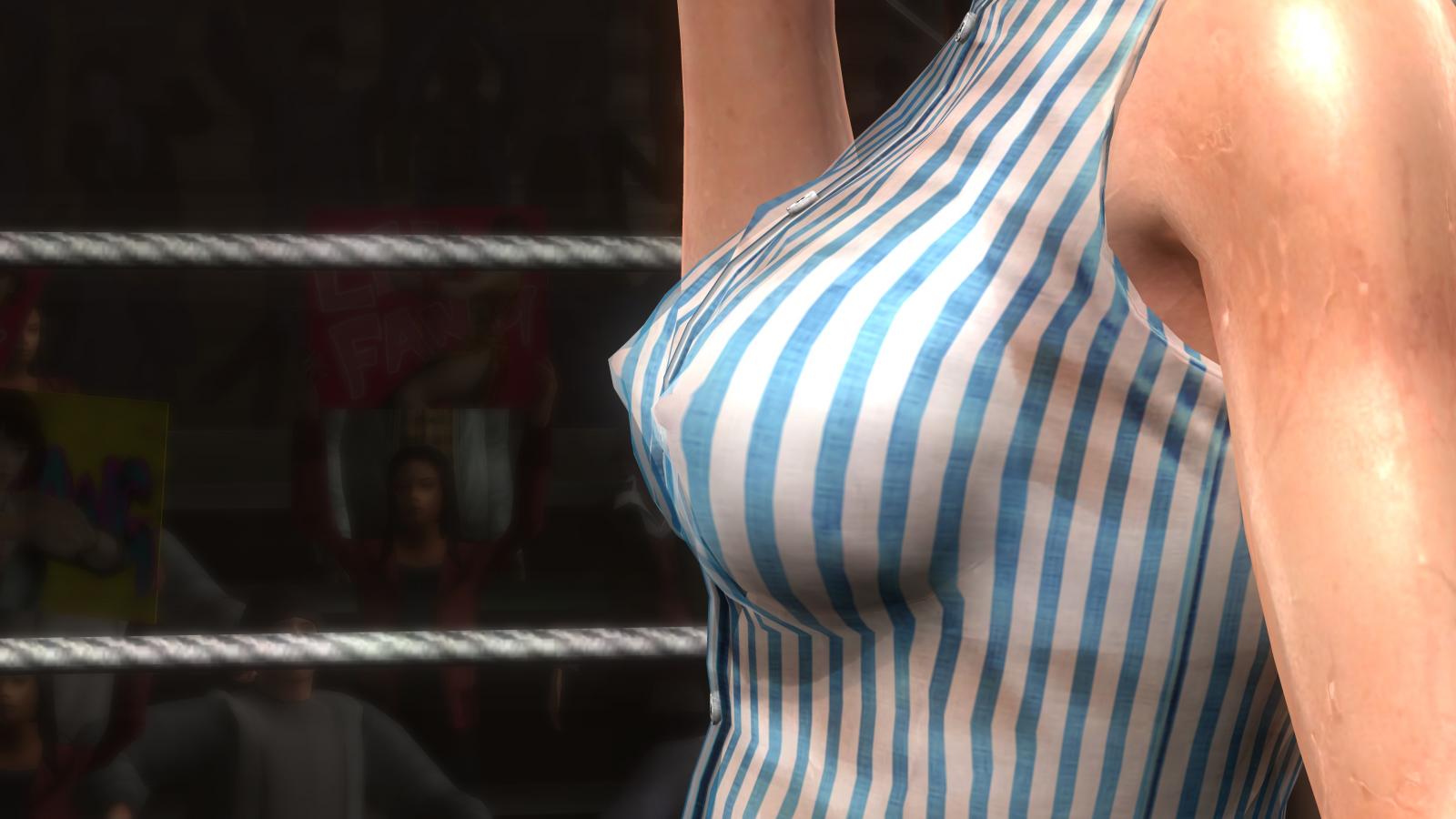 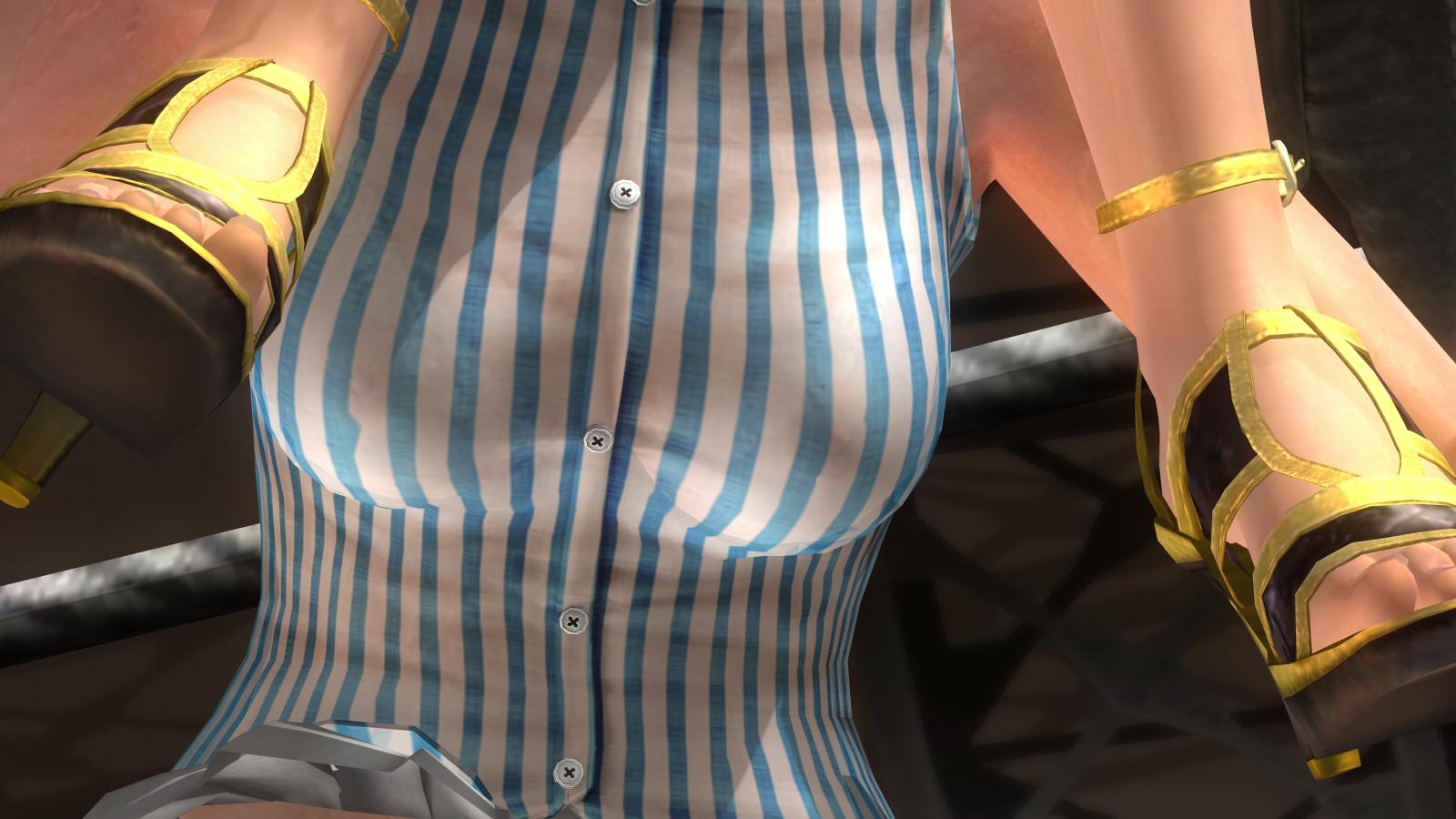 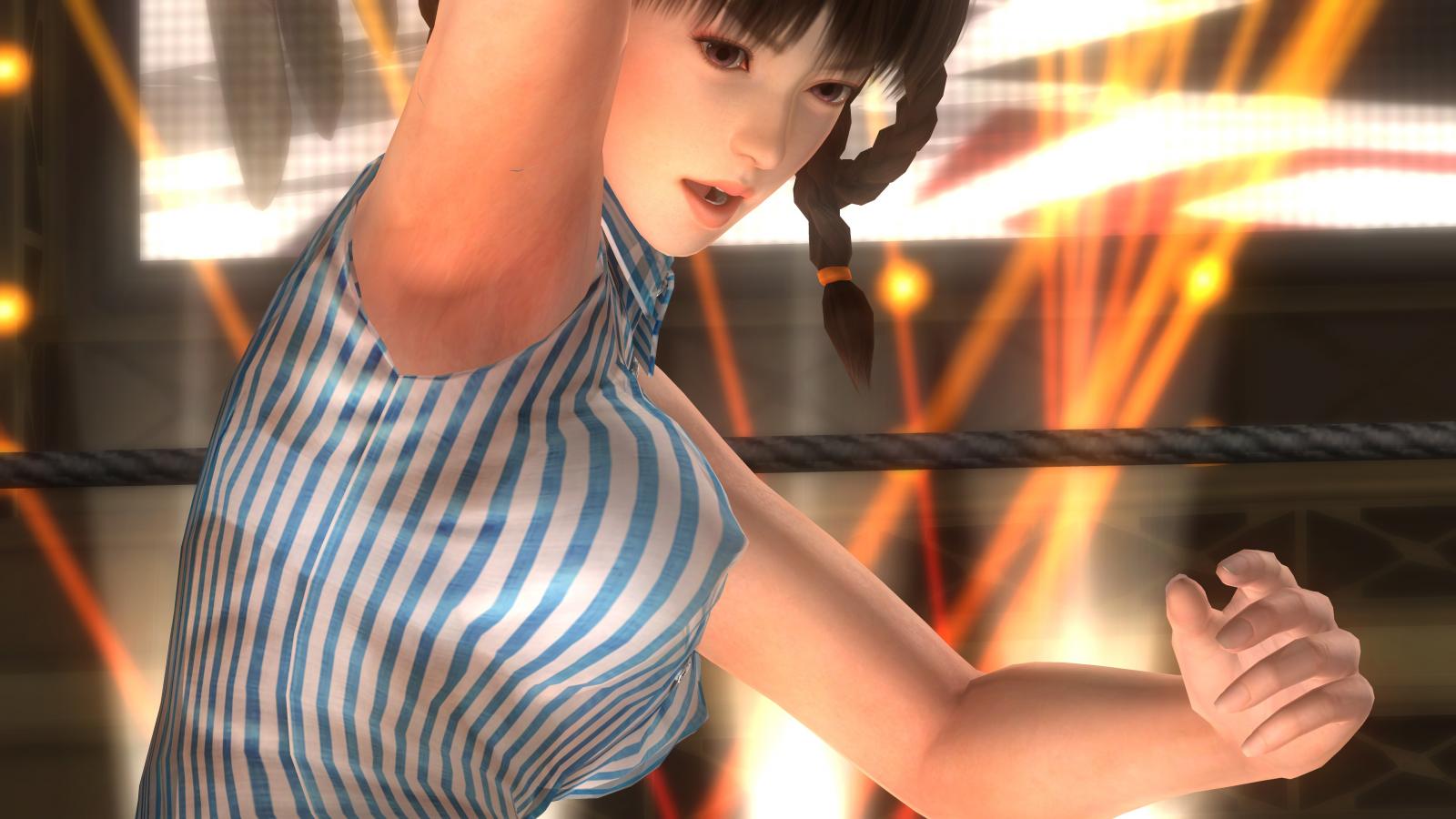 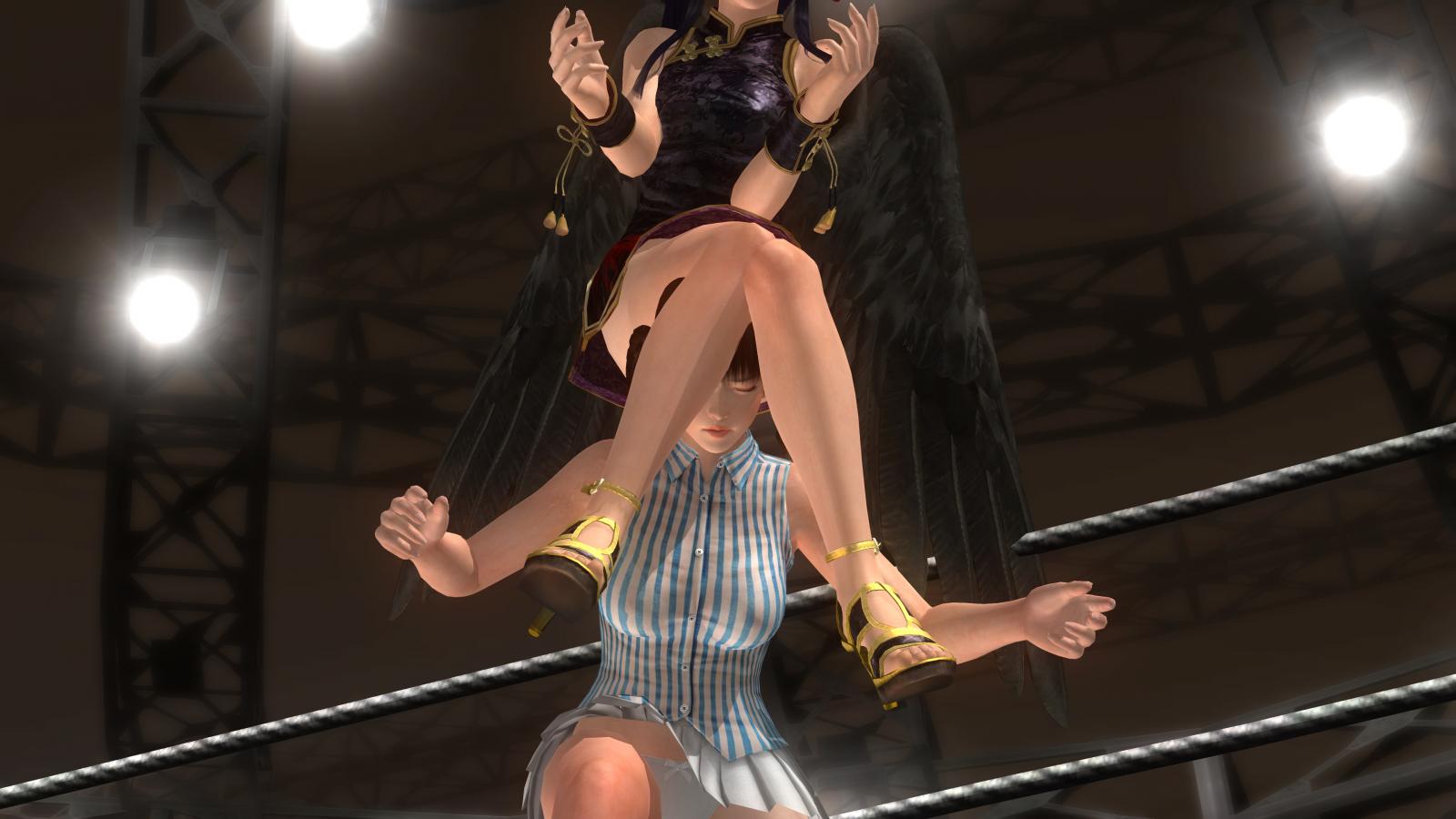 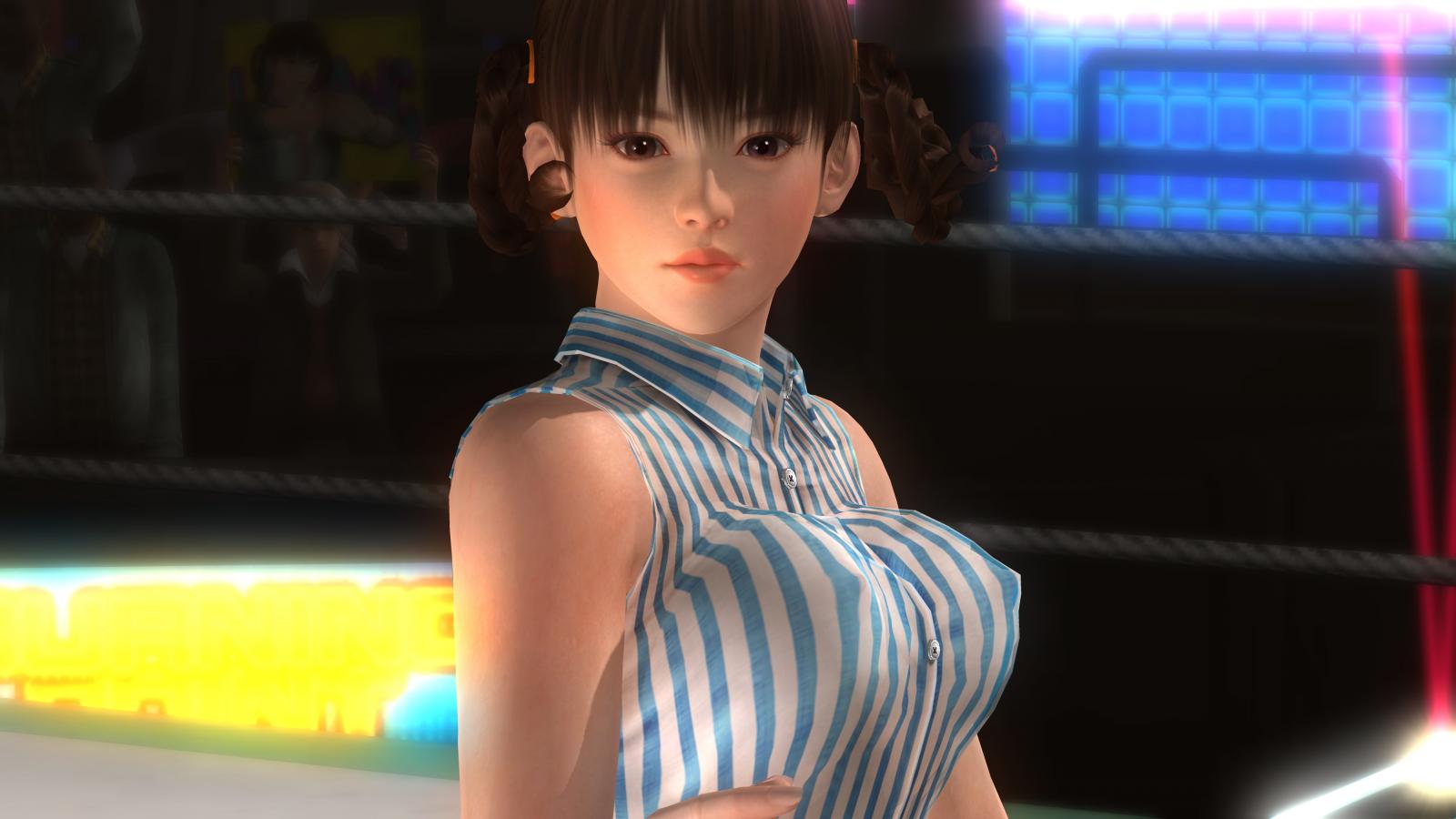 Use Ink Reshuffle to replace the existing COS_009
As usual, credits are listed in my original post's "acknowledgement" section if not specifically mentioned here.