I dunno, I've got mixed feelings about this... looks like another step in the ACTIONhorror genre, but then again most reveal trailers these days go for lots of explosions and action to get people pumped.
On the bright side we are seeing some cool looking creatures, straight up zombies, and grab attacks. Though on the down side it sounds like the game will be something of a sausage-fest... (Here's to revealing fully playable female characters right?)
I think my favorite part of the trailer is when that generic marine/soldier dives for cover like he just got out of Gears of War, and immediately get's yanked from it... though I hope it's just a "take that!" to cover-based shooters not a sign that RE will become one.

I will be keeping an eye on this though.

i have a feeling it's going to be like Resident evil 1 and 2 with the story. play as Leon, beat the game get Chris story, then beat that get Ada and so on...
just a feeling. just a good feeling...

onlinehero said:
uuuuuuhhhhhhhhhhhhhhh where's all the chicks?
Click to expand...

They know what we want from them, so they must be hiding!

Actually there's this from IGN:

Chris Redfield and Leon Kennedy will not be alone in this new game. Both Chris and Leon will have unnamed partners of their own, teaming up in similar fashion to the Chris Redfield/Jessica Sherawat and Jill Valentine/Parker Luciani pairings in Resident Evil Revelations. Sources tell us Chris and Leon will have seperate stories in the game that will eventually overlap in some capacity.

We're also told Ada Wong will have a playable role in the game, though not immediately. It appears as though the Ada storyline will become available to players after the Chris and Leon arcs have been completed, plus a third primary narrative featuring a new character. Any of the three main story branches will be selectable early on in the game, allowing players to see each storyline through to completion before starting another one.
Click to expand...

So there's Ada at the very least, plus that lady in the trailer appears to be Leon's new partner. And this game is slated for a PC release some time after the console releases so there'll always be model swapping if they shaft us on the ladies playability.

With walking aim and new actions, I think the gameplay will be much smoother now, that's great. New zombie's moves and new enemies look quite good too.

I also interest in the 3rd hero. Some fans guess he's the last "Wesker"...

that blonde her voice makes me think she's rebecca. I know it seems stupid to think that but *points at jill in RE 5* I would like to see her back in the series. I'm liking the new monster designs. I think when it comes to females they will probably reveal them later

haha i was going to say that!! hahaha i totally agree and hope it is... but i have a feeling it's not...

either way, she'll probably end up being my favorite character. :P
R

Capcom released picture with the main cast of the game

Each pair are in the same row so pair 1 and 3 are our interest ,

So from the main cast there is two female characters , Do you think there will be an unlockable switch character feature like the one in RE5 where you can play as Sheva after completing the game ?

I will try to post any info of this game here that may interest us
Last edited by a moderator: May 31, 2012

I was hoping for Rebecca but I am glad it's older Sherry and she looks great. I was worried it would be Ashley for a bit. Thank GOD it isn't

randomguy said:
I was hoping for Rebecca but I am glad it's older Sherry and she looks great. I was worried it would be Ashley for a bit. Thank GOD it isn't
Click to expand...

bah jill is boring imo i miss rebecca though she has not been around since O and 1 :( yeah she was kinda in 5 but not really
R

Here is the E3 trailer for Resident Evil 6

I have a bad feeling for this game in terms of ryona based on that trailer , I fear that Leon and Helena part would be Operation Raccoon City V2.0 with zero to minimum ryona while the real resident evil which is the kingdom of ryona would be in Chris and Piers part , Now I wished that they could bring Claire or Jill or any female as Chris's partner at first

My daydreaming now is the ability to switch any character at any chapter but I know the max we could get is switching partner like in RE5 , Luckily there is a PC version for this game so if the worst case happened and all the ryona goes to the Chris part then hopefully Modders can do their Job , Also Capcom teased that they may include Jill and Claire into this game but I predict that they would be playable only in mercenaries mode or in a small DLC mission like in RE5 , May be Capcom will include some missed opportunity monsters into mercenaries mode and that would fix some of our issues
Last edited by a moderator: Nov 18, 2015

I think I read that Ada is confirmed to a playable character. I don't follow news much so forgive me if this is false info.

First I'd like to apologize for how cluttered this post is. The demo came out today and I took a couple goes at it. It's the same demo from E3 and lets you play through a small portion of the three campaigns. Thankfully if you're playing solo you can choose which character you want to play as before you start. Unfortunately each demo portion only really features 1-2 enemy types. It also kicks you back to the main menu if you die, which makes the Leon/Helena portion of the demo incredibly tedious if you're looking to get to the ryona. Attempts to die aren't helped by the fact that your AI partner is constantly shooting everything. You can't manage their inventory and take their weapon away in the demo so you just have to hope that they're occupied with something else when you're grabbed. The demo supports online coop so if you want to try with a friend you could do that. Anyways here's what I've found so far.

Leon/Helena - This portion of the demo is incredibly slow and the zombies only appear at the very end of it. When you first encounter a zombie it will lead into a quick time event. The zombie will knock Helena over and jump on top of her. If you don't struggle fast enough it will bite into Helena's neck and kill her. You can't really see the initial bite since the zombie blocks most of your view. Now what really impressed me was how they handled the death scene with the zombies you fight normally.

Grab 1: Zombie grabs Helena by the arm then bites her in the neck. Pretty standard
Grab 2: Zombie grabs both of Helena's arms then bites into her forearm.
Death: Zombie pushes Helena down to the ground. It then bites her in the neck and starts tearing into her stomach with its hands, pulling out her entrails and feasting on them. The zombie then looks back over its shoulder at the camera, reminiscent of the first zombie you encounter in Resident Evil 1.

Chris/Piers - Obviously won't matter to most people. Still I tried to see some of the grabs here in case the enemies carried over to the other campaigns in the full game. In this part of the demo you'll be fighting the J'avo, a bunch of human-like enemies that use weapons. If you shoot certain body parts they'll mutate. So if you shoot their legs they'll sprout wings or if you shoot their arms they'll grow long, scythe/crab like appendages. These are the only two mutations I've seen so far in the demo. There are also some J'avo who wield machetes that can grab you.

Grab 1: Flying J'avo's have their legs replaced with a winged creature, their upper torso hangs upside down from the bottom of it. The upper torso can grab you and if you don't struggle you die. Simple as that. You just drop dead. No special animation as far as I can tell.
Grab 2: Machete J'avo. They like to grab you from behind. What they do afterwards is unknown to me. The AI just loves to ruin it by breaking you free.

Jake/Sherry - You'll be fighting a large humanoid with a mechanical arm called the Ustanak. There are also a few weaker J'avo in this portion of the demo. However, unlike Chris and Piers' scenario the J'avo here don't mutate. That leaves the Ustanak as the main death dealer in this scenario.

Grab 1: This becomes available immediately once you start this section. During this short sequence you have to run from the Ustanak. Assuming you're playing as Sherry If you don't outrun it it will grab her with its mechanical arm and quickly squeeze/crush her to death.
Grab 2: When you fight the Ustanak in the second half of the demo he'll try to grab you again with his mechanical arm. If he manages to grab you four needle-like appendages will come out of his arm and stab into the front, back, and sides of Sherry. If you die at this point Sherry will simply slump over in its grasp. 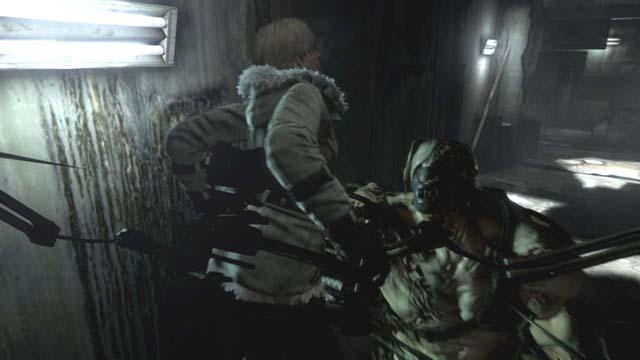 I should add that, as is typical with most Resident Evil games, the screams/death moans in the game are superb.

There might be more deaths/grabs but I don't really have the patience to repeat the introductory parts of these levels every time I die.
Last edited by a moderator: Jul 3, 2012

Cnby said:
Zombie pushes Helena down to the ground. It then bites her in the neck and starts tearing into her stomach with its hands, pulling out her entrails and feasting on them. The zombie then looks back over its shoulder at the camera, reminiscent of the first zombie you encounter in Resident Evil 1.
Click to expand...

This sounds absolutely amazing and I'm dying to see it.

I'll admit, I don't think RE6 will be a very good game, but I'm eager to see any ryona content. And I hope we get to see both Jill and Claire appear in the mercenaries mode so they can suffer too.

Damn cnby...where did you get the demo? At what console? My xbox is lost somewhere in the great cosmos right now, so only have my PC to get it...

fedefyr said:
Damn cnby...where did you get the demo? At what console? My xbox is lost somewhere in the great cosmos right now, so only have my PC to get it...
Click to expand...

The Resident Evil 6 demo is currently available for those who own a copy of Dragon's Dogma on the 360. I don't know if or when the PS3 will get access to the demo.

RE6 ryona incoming in several hours. As soon as the damn demo finished downloading. 30KB/s... *cry*