Ever since 2005, I was encapsulated by Starcraft Ghost a game which unfortunately never came out. It was more unfortunate for me since it seemed to have potential to have some of the greatest ryona which satisfies my fetish which I mentioned a thread under here titled: "Skin-tight suit/catsuit/spysuit female protagonists?"

I enjoy seeing strong acrobatic stealthy female protagonists in catsuit/spysuit outfits going through a mission only for her to get overpowered, captured, and ultimately tortured, sexually tortured and raped (which most likely will never see its way in a game but I can only imagine).

One of my favorite heroines which fall under the category would be Nova from Starcraft ghost. 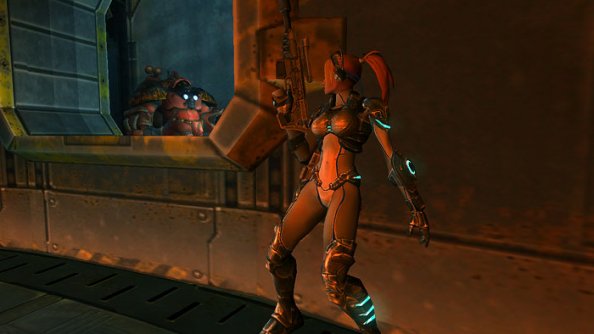 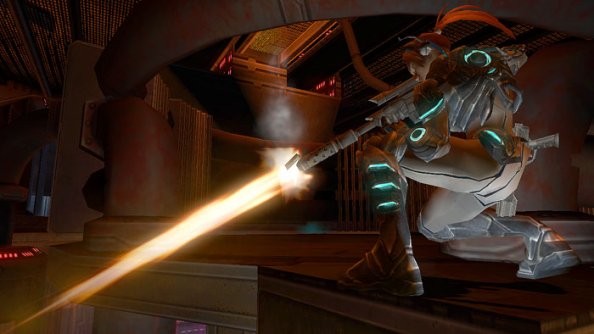 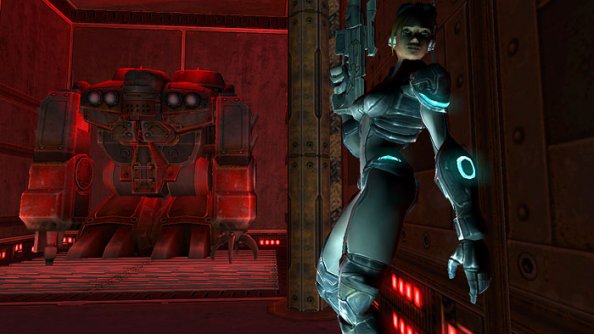 These are in game screenshots from the game which was being developed under the developer Swingin' Ape studios.
I enjoyed this character model the most since it gave Nova much more of a lean muscle/acrobatic body.

There were so many scenes which I wish I could've seen in her being caught, captured grabbed from behind, belly punched,
failing a stealth kill, and so on...but alas the official gameplay videos never showed any of this - not even a single death scene.

I COULD NEVER FIND A SINGLE GAME OVER/DEATH SCENE.

I never thought I'd be able to see a death scene with Nova but here it is. This was taken during E3 2004, with a player demoing
it...check it out for yourselves in case if you're curious. I don't think there are many that find my fetish quite their taste nor
interesting, but I think a cancelled game featuring an incredibly sexy heroine deserves some ryona exposure - so here it is (00:00-00:30):


Unfortunately the video isn't the best quality and it doesn't have direct feed of audio, but you can hear the moans and groans of
Nova as she is shot and eventually a bit of her death cry as she gets killed and has her body laid out on the platform which
she thought she could sneak by.

Let me know your thoughts.
A

Amazing find! I was craving this game as well, and then was heartbroken when it turned into vaporware. This isn't much, but it's more than I thought we could ever expect to get.

I love to think of all the things that fans like us will do to graphics and models of Nova if we could ever get our hands on these...
M

dharmi said:
I love to think of all the things that fans like us will do to graphics and models of Nova if we could ever get our hands on these...
Click to expand...

seriously if we had the model of nova - that would be more than enough. The only model that's out there currently is just the on from Stacraft II - which is not at all the model meant for Nova. Maybe Widowmaker's Nova skin from Overwatch but even then...this model from Swinging Ape studios was the one we truly wanted.
M

ajstevus said:
Amazing find! I was craving this game as well, and then was heartbroken when it turned into vaporware. This isn't much, but it's more than I thought we could ever expect to get.
Click to expand...

it's been over 3/4 a year since I posted this but I couldn't agree more. really would at least like to get the demo from somewhere or someone to see what kind of things could have happened to Nova. there were instances where you had to press the button at the right time when performing a stealth attack, meaning you could fail a stealth attack. Does that mean she could have been grappled/caught or pinned down? Damn I wish I could know - I have my imagination but an actual gameplay event satisfying my curiosity would have been something.
A

Friends, the holy grail has been found. Somebody out there got their hands on a leak of the Starcraft Ghost demo and uploaded a 1.5 hour video of it:


To make it really wonderful, either the control scheme is wonky or they aren't very good at the game, because they manage to get killed repeatedly (starting at 15:00, then more at 37:30 - 46:00 a number of times.) Nice death screams, ragdoll, and with that awesome Blizzard touch that the enemies go up to Nova after finishing her off and check her out, raising her up or lifting her arms for a pulse. The Zergs shake her body in their mouths after they're victories!

Never, ever thought we'd get this stuff, and I'm not sure how long it will last, so check it out while you can!

There's another leak, from a later build, here. It also doesn't end well for poor Nova.

so the emulator cxbx reloaded will run this..... barely, it crashes alot
more importantly all the files are just sitting in the folder.
all the animations are in seperate files, giving a good look at what this version has
i've spent a couple hours going through them all this is what ive found:
the zealot, hydralisk and zergling all have a deathblow animation for nova, this plays when they hit her with a certain attack and it deals lethal damage
the zealot, hydralisk, zergling, scv infested, infantry and marine all have a defile animation, this is when nova is dead and they go over and pick her up, she doesnt have an animation for this, she just ragdolls, basically one of her model "bones" attaches to a part of their model while they play this animation
the marine and the infantry have a fail animation for the stealth kill, these play when you fail the stealth kill qte

all the characters have a file that indexes what anim gets play for the situation they are in, you can easily change some anim names around in this file to preview what the animations look like in game

I havent found the zealot in game, he may be at the end of one of the levels if they would stop crashing

there are alot of enemies planned if you look through the files, but in terms of what this leak contains it seems mostly barebones, well, aside from finally playing this long lost game
A

If you get those deathblow/fail/defile animations to work, please make a video of them so we can check it out! I doubt these leaked files last long before Blizzard gets them taken down.

Edit: Oh, and if you could point to where we could get the files, and possibly play the game, that would help too. ;)
A

Here's a playthrough on an extremely bug-free and stable version of the game. Good to get an idea of the graphical fidelity. However, the player has absolutely no interest in ryona and doesn't die once. If anyone can locate a version like this, we'd be in business!

LADIES & GENTLEMEN - WE DID IT. THANK FREAKING GOD WE FOUND IT - please please please, I really mean it but this is the GAME which I wanted to get for RYONA. But it took so long for a leak to come out and now we have it - I will do my best in finding how to get some videos/files etc. - may we all work together on this? Because I really would like everyone's cooperation on this.

Also all - where can one actually get a hold of the leak?
Where should I be looking? - thanks for the help in advance - I really wanna help out in providing some ryona vids for this one.
M

By the way some of the ryona which I had imagined up all the way back in 2006, ended up being exactly as I thought - I'm super surprised. The fact they go up to her after they kill her, the way if she fails a stealth qte, she gets knocked down on her back.

What I especially love is how acrobatic she is in that skin tight suit of hers (the hostile environment suit) - god damn, the hottest female video game character yet. All that confidence in her body and abilities only for it to come crumbling down one she's spotted and they gang up on her - just so damn perfect...the best ryona in a while. I would love to see more of the heavily armored soldier picking her up while checking her dead body out. - so hot.

While the emulator kind of bugged out and showed in her a "black suit" - it was still hot nontheless, I can't wait to see all of her ragdoll animations, screams, and so on in that regular white skin tight hostile environment suit of hers.

Thanks for the help everyone - let's get to work on this.

Those files better not get taken down - the internet is a vast place, there's no way they could stop them from spreading to everyone.
M

Starcraft: Ghost looks like a game with great potential. That was in 2003? Amazing. Blizzard in 2019 can't even equal the quality of its failed/incomplete products in 2003.
M

Check out from 20:00 - 30:00 the guy's having a fun time and doesn't really care about dying. Another one right around 57:00. Nova has some sweet screams and ragdoll...that body god damn....pretty sure they did more to that body after checking if she still had a pulse or not. 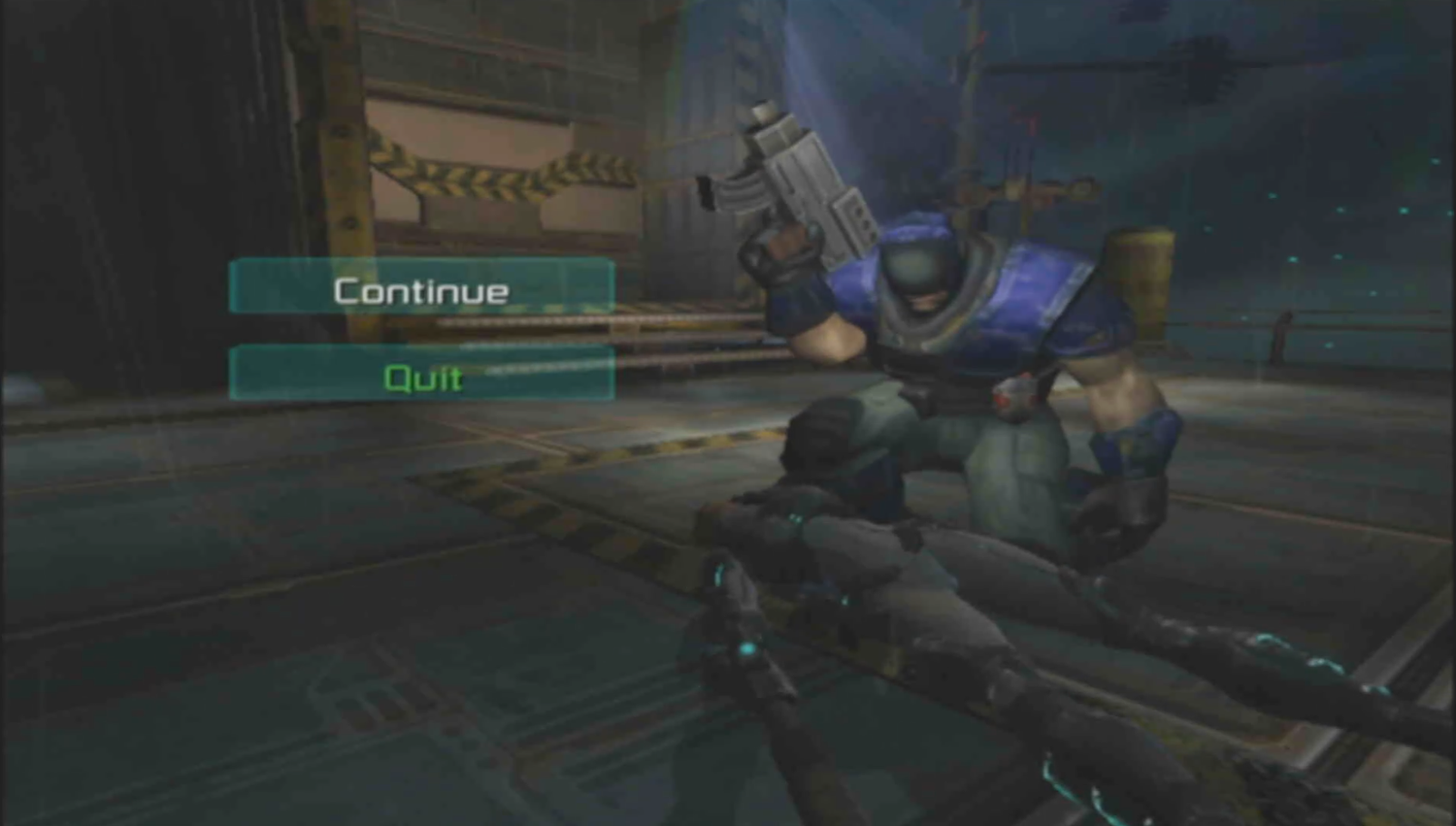 Not the greatest resolution - but pretty hot image. Super buff guard of "KLF" examining Nova's athletic/acrobatic body after finishing her off. Wonder what he'll be doing with her body...
A

God, it's a bummer that no ryona vids ever came out for this. Just gameplay clips, and only a few of them.
Last edited: Mar 26, 2020
M

ajstevus said:
God, it's a bummer that no ryona vids every came out for this. Just gameplay clips, and only a few of them.
Click to expand...

one of us just have to get the leaked game, and a hacked xbox ...and then we're all set and good to go. The only thing i'm missing is a hacked xbox.
You must log in or register to reply here.
Share:
Reddit Pinterest Tumblr WhatsApp Email Link
Top Bottom