Run the installer as admin.
E

I have ran as admin, removed any conflicting software, (anti-virus) and even tried running in developer mode, still the same error. Even unistalled everything and tried again. I don't understand what it could be. It works just fine on my other laptop running Windows 8, but on my new laptop running Windows 10, I get the error message.

Thanks I'll give that a shot. That may have been mentioned before and I just missed it. Just got this new laptop yesterday so trying to set everything up again. Plus having to make the learning transition from Windows 8 to 10.
E

Alright so I uninstalled everything, unblocked in properties, removed 3rd party antivirus, disabled Windows defenders, and then reinstalled everything. When trying to install bdo toolkit I am still receiving the gac access denied error. Resorepless installs just fine, just having issues with the bdo toolkit. Am I missing something? Everything installs just fine on my laptop running Windows 8. It's just not working on my Windows 10.

I'm really not sure why this happens, and I've never been able to reproduce it to address it, you could try manually dropping the files (BDO Toolkit.dll and the policy files) into the GAC folder but that's all I can really think of.
M

So this will be a bit of a long story because i want to give as much details as possible so you could have a easier time understand what type of problems i got, i need some help with Restore N' Patch and BDO Tool kit. I was using Suzu's nude mod and decided to do some changes to the files in files_to_patch, after i ran meta injector my Restore N' Patch wouldn't work and it show me some errors (sorry but i forgot to pic the error).

After that i tried various way to fix it, end up making a mistake by deleting the back up meta file that meta injector created and another back up meta from a program called 3d converter. Now whenever i tried to launch Restore N' Patch, it keep showing this : 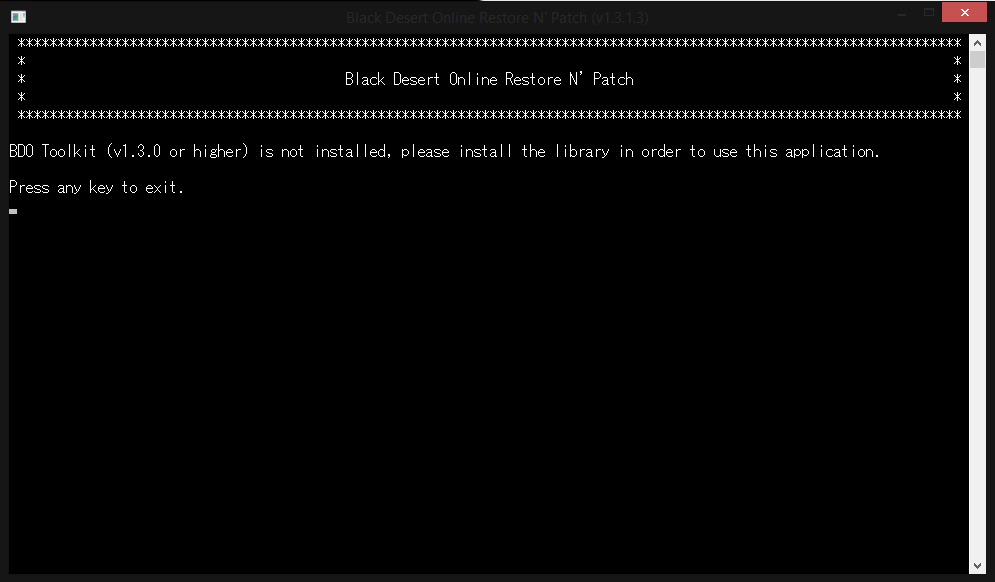 Even though my BDO Tool kit is already installed :

I've tried stuffs like : delete & redownload the whole game, reinstalling BDO Toolkit, replacing all the files in PAZ folders (except game files) and it still doesn't work. Notes : The server i'm playing on is Gamez BD (it's using the NA client), i ran meta injector/BDO Tool Kit/ Restore N' Patch as administrator and i also have BDO on Steam.

So is there any tip or safety procedures for me to completely remove it from my game? i just want to install mods and i'm fearing that something might happen if i just casually remove it and install BDO Toolkit 1.3.0.

The library is installed into your copy of windows for other programs/tools utilizing it to have access to it, it does not affect the game.