If you know i made something but dont see it thats because it was in the old thread which no longer has anything in it. They can be found in the archive though so please download it isntead of pming they're all there


Ryuko Matoi(Kill La Kill)
the layering for the breast strap is weird not even sure if theres a way to make it work right in the game with it attaching to the skirt. some of itll disappear under her stomach when moving 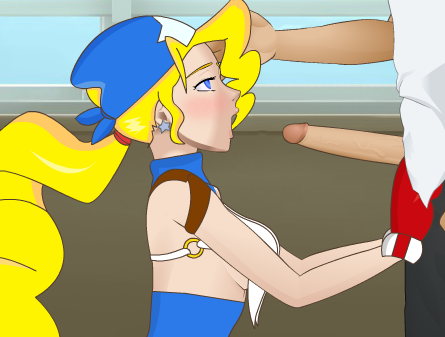 
Rainbow Mika(Street Fighter)
well this turned out to be frustrating. finally finished but the dynamic hair didnt come out how i wanted it to. not sure how to properly make the kind of pigtails she has tried making top on static with other part dynamic but its moved around and showed empty spaces. so ended up putting that top part on the top section of the dynamic hair it works and looks fine but i cant make the top section stay in place so when shes moving the hair dynam part moves around the base of the hair it kinda looks weird...so ill leave the fla maybe someone knows how to make it properly..i dont

View attachment makoto.swf
Juri(Street Fighter)
you'll have to make your own char code. just load the hair first remove all clothing material then load the clothes and make boobs smaller. and i think the pink nail polish is missing. i prefer it with angry mood and put the resistance up for better dialogue and stuff

View attachment marmo.swf
theyre not hue shiftable or size changeable because i dont think i have the patience to grasp the concept and then actually go through with it but if anyone wants to edit them just ask for the fla(cs5) and ill send it your way
Last edited by a moderator: Nov 24, 2015
F

Good to see you back!
Nice posts!

Its nice to have you back :D I am looking forward to your new imports 8)
D

Very nice, and welcome back.

yes but it was kinda messed up the dynamic part wasnt long width wise so it looked weird whenever she moved around too much.

The issue is that they aren't long enough?


Zombie_Kojiro said:
Ryuko Matoi(Kill La Kill)
the layering for the breast strap is weird not even sure if theres a way to make it work right in the game with it attaching to the skirt. some of itll disappear under her stomach when moving
Click to expand...

Well maybe if they're longer, they can hide under the skirt to make the illusion of connecting.
C

It's good to see you back with some new mods they look great. Hope to see more from you 8)

Absolutely loving all of the Street Fighter girls! I was wondering if you could make Elena next?
You must log in or register to reply here.
Share:
Reddit Pinterest Tumblr WhatsApp Email Link
Top Bottom