higher said:
It is not working in kr and ru servers yet?
Click to expand...

How do I fix this?

Edit: Nvm, I was able to fix this.
But min/max body parts doesnt work. Is there a solution for this as well?
Last edited: Jan 7, 2020
K

anyone having problem with the bad module info crash?

not sure if the mod has anything to do with it, it seems to be a hardware issue

BlackFireBR said:
What about that thing I saw a few pages earlier saying that you need to apply the mod and delete all the .exes and folders before you launch the game?
Click to expand...

Thankfully not happening on EU yet i have them in the Paz folder without any problems.
X

Ive somehow broken the mod after trying to add external files to it, but now when i uninstalled it and reinstalled, it doesnt work anymore. Help please? 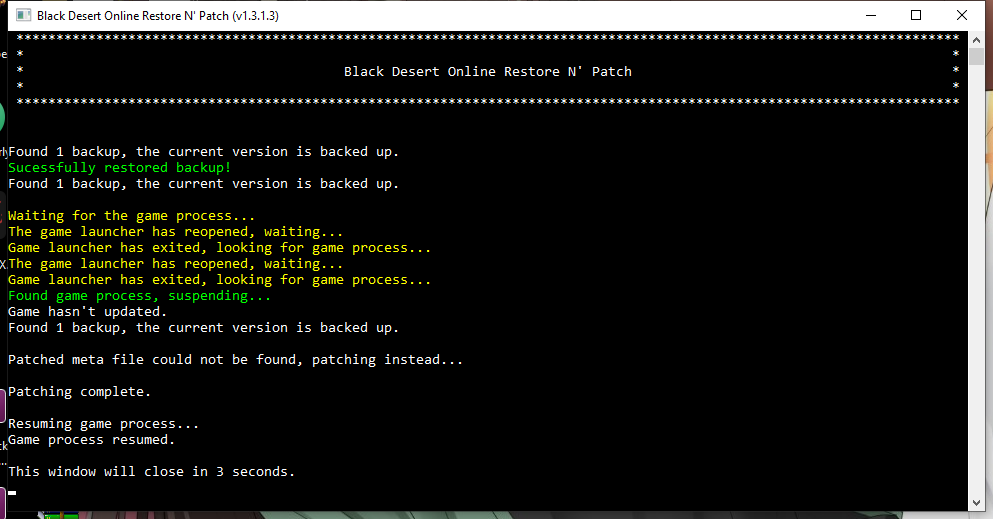 BlackFireBR said:
Speaking of the first page, can anybody make a quick tutorial here of what is still working and what do we need to do to make it work? I would like to update the first post with that info at least.
Click to expand...

Custom sliders are only working partly. Only the lower body, forearms and breasts take effect by the modification. Other sliders like upper arm etc. are unaffected.
Last edited: Jan 7, 2020
W

nika01807 said:
Custom sliders are only working partly. Only the lower body, forearms and breasts take effect by the modification. Other sliders like upper arm etc. are unaffected.
Click to expand...

I don't believe this is a widespread issue, it all works on mine (NA).
3

watercooled said:
I don't believe this is a widespread issue, it all works on mine (NA).
Click to expand...

Yeah it works for me too.

This mod works perfectly for me so far (NA). I'm using it to hide all underwear, no hassle or anything, just straight up works. Well, except for Shai. Their crotch and chest are invisible. There's probably a way to fix this, but I'm a bit lazy right now (let me know if you're interested in a fix). And armor with built-in underwear still have it, but maybe I need to play with the options more. Also just noticed maid's crotch is covered in shadows. Weird. Also some stockings are invisible even when set to keep it.

Also, I did not have to run with Restore N' Patch, just run the game normally.

Oh, and be sure to remove the exe from the folder after you patch. It's detected by xigncode and will close the game.
Last edited: Jan 8, 2020
F

I got kicked every time i logged in with a "suspicious program" alert because of the resorepless.exe. This always gave me a 12 minute ban/ cooldown. I moved it out of the folder and i tested it a bit ingame without getting kicked. After readjusting some settings, i started the game again and saw, that i had gotten the 12 minute ban again even though i did not get kicked nor had a "suspicious program" alert.

Does anybody know how to fix that?
N

watercooled said:
I don't believe this is a widespread issue, it all works on mine (NA).
Click to expand...

Well I see. In resorepless.exe aren't even all body parts included. There is a lower back and belly, but no upper back and chest.
F

Other question: Will i only be getting these 15 minute bans or might they get harsher when i accumulate too many of them?
H

how do i patched the game using Meta injector???
G

This is asking to overwrite files in the Paz folder. Should I allow that, or, is this supposed to be installed inside a folder inside of Paz folder?
X

So apparently my mod works now, but basically i dont open Restore N Patch to use it and it seems to work running the game normally?
G

somehow it is not working for me anymore. the game just crashes and wont even start
in resorepless customise settings are keep all everywhere, female only, 3d, medium bush 2, classes the mod applies only valkyrie selected, run resorepless and injection
and then i go tools, remove armor and remove summer clothes and bikinis and kibelius armor, apply and run injection
it worked flawless last week

edit:
managed to run it without removing the armors
edit 2:
managed to 'run' the game with removing the armors, i run the game 1st without removing armors only resorrepless then quit and remove armors, BUT the game still crashes. it crashes when i select channel and would like to go to character selection
edit 3:
managed to run it, I DID EVERYTHING THE SAME EACH TIME, took me very long as restoring backup didn't work and the game still crashed, had to repair each time, TURNS OUT I JUST HAD TO RESTART PC AFTER INSTALLING

so if it doesnt work for anyone, here is what i did:
-extract bdotoolkit files into Paz folder, install, remove files (need to do it only once, you don't have to it each time)
-extract resorepless and metainjector into paz folder
-run resorepless:
-customise, install, run injection, back to resorepless
-tools, remove armors, browse files, select armor with space, when all selected press enter to run injector
-FINAL MOST IMPORTANT STEP:
remove resorepless and meta injector files and empty recycle bin
restart pc

so since last patch an extra step is required for me, which is restarting pc
it is weird as i dont get any errors just the game crashes on launch if i dont do it

Shisaye said:
Thankfully not happening on EU yet i have them in the Paz folder without any problems.
Click to expand...

how you do that, my game starts but very soon closes after loading a character without the mod installed just having resoreples.exe on pc (EU)
Last edited: Jan 11, 2020
A

Can I get help removing part of an armor? I'm following the directions in the op but I think there's more to it than that. I'm trying to remove the top (bra) of Lahns default armor. Do I just cut out the bra part from the purple colored .dds file? Do I really save it with DXT1 compression? Because it looks all grainy when I do that. Should I use DXT5 instead? Can someone please explain step by step what I should do? I'm using Paint.net. 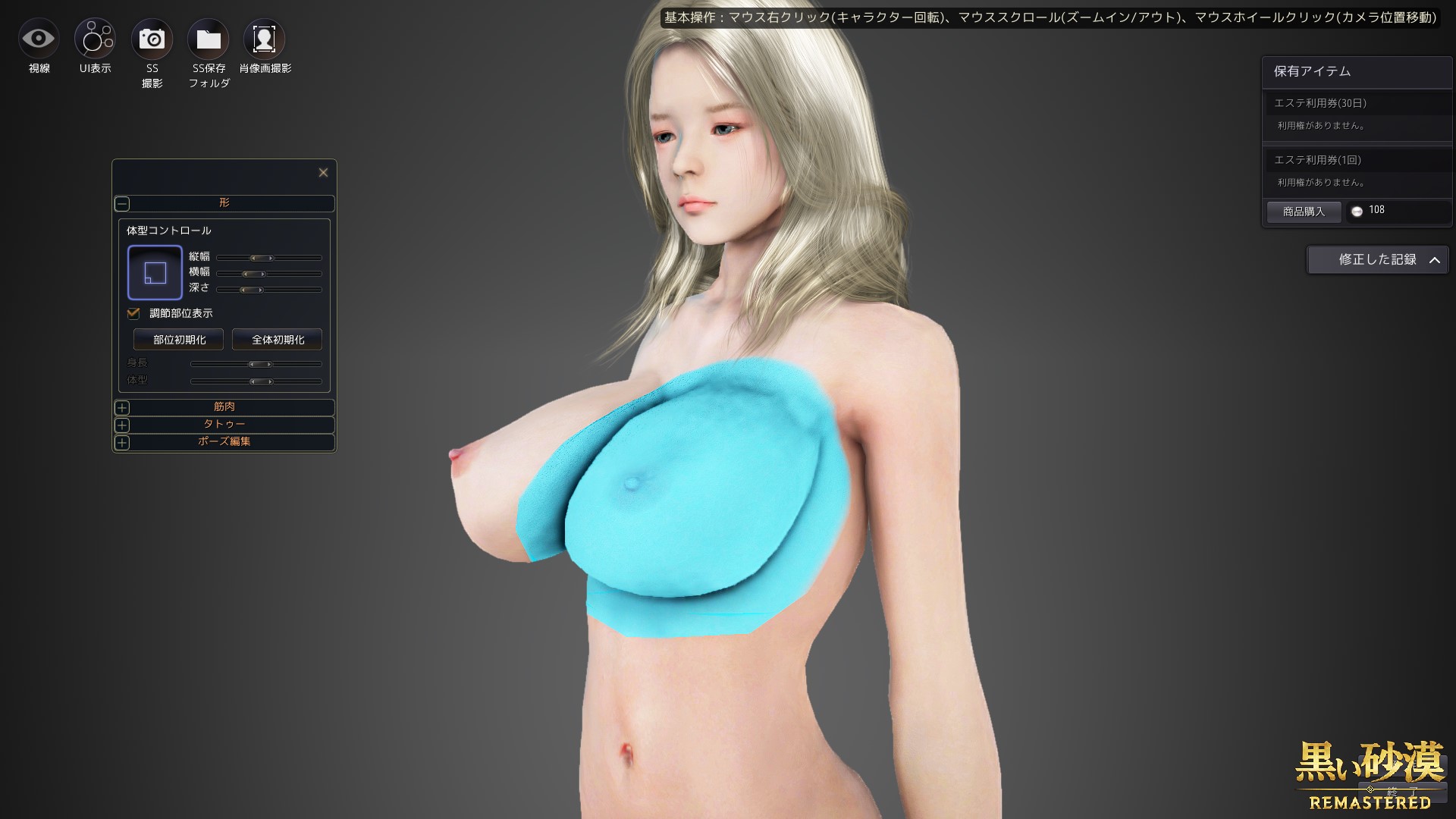 Breast slider without Resorepless
The maximum value of the breast is a setting of 5.25.
For other numerical values, only the minimum value is rewritten.

Robnightus said:
I keep getting the following error after running the game while Restore N' Patch.exe is running. Followed all steps to the letter. I've also uninstalled and reinstalled, everything is run with admin permissions. Can anyone point me in the right direction?? Thanks!