Hello everyone,
started over a year ago - yeah... it's been a long time, @DrZombi and

Slingerbult (if he ever comes back) will tell you - I am happy to finally release this dialog. 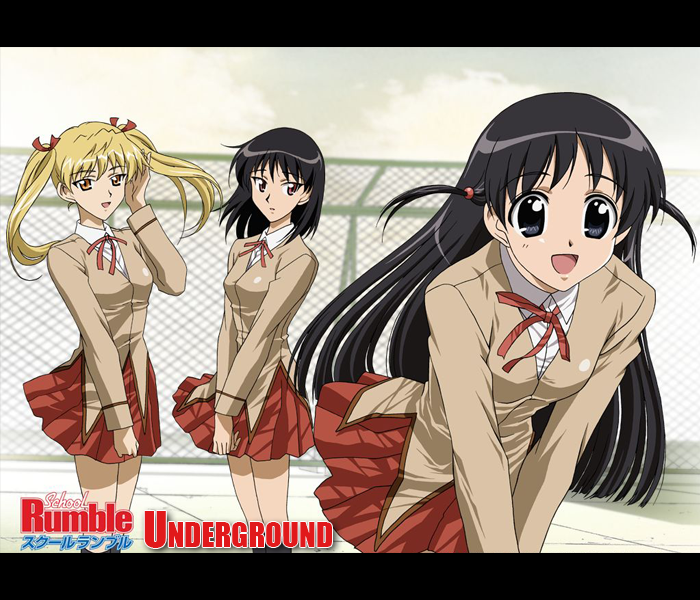 School Rumble Underground isn't meant to be played, it's mostly a story, you almost don't have to do anything, and it's about 2h45 !
It involves 4 different female characters, rely on more than a hundred positions, provides dozen of new clothing and dynamic hair mods, uses a lot of 3D background scenes, and - I believe - offer some original things that have not been proposed before.
It also involves extensive obscene situations and taboos (don't worry, no underage or law breaking things, if any moderator wonder ).
There are so many files included that this dialog is delivered as a bundle that you just have to launch as your usual SDT loader. The base is sby loader pack, but it's much easier for you if I provide a full functionnal bundle.

Before I go any further, I want to thank @DrZombi and

Slingerbult who helped me when I started to write dialogs and gave me some valuable feedback, and @Pim_gd and @sby who were very supportive, providing features and answering requests in a way I'll never thank enough. Thank you guys!

As a story, School Rumble Underground uses extensively the CustomAutomation mod. All those who used it know that it can behave differently depending on your system performance. It means that I cannot foresee every behavior on any kind of PC, despite I tried to make something as reliable as possible. If you encounter any issue that I did not covered in my troubleshooting guide, I'll do my best to help you fix it

To help you understand the background of this story, there is a file named SRU_background.pdf in the READ ME folder of the bundle. I strongly advise you to read it, it's not long.
There is also a troubleshooting guide in the same folder, named SRU_troubleshooting.pdf that you MUST read. I will answer every message requesting help about an issue that is covered in this guide by forwarding you to it. I will do everything I can to fix everyting else

I'll upload separately almost all of the mods that I made for this bundle later. Some of them require a revision before a standalone release.

So far from what I've seen, I like it well done
N

Now that I've played it through I have to give it a 10/10.. Does it mean it's perfect? No but does mean it's a must play. And the things I would seen changed here and there are so few and far between that it's not really worth mentioning them, though the biggest thing that made me feel a bit empty handed is the lack of chooses but with such a large project I can't really complain much about it.

Thank you very much! It's so rewarding to read such feedback
I understand what you say about the lack of choice. It would have been like some existing games that works like that, but it also would have took forever to me to release it
Of course, it doesn't prevent me to release a future project working this way, but it will be shorter.
By the way... you didn't waste your time to play it through!

it does not work at all language in french :/

Of course it doesn't work, the files are not ready yet
I thought I would have done it by now, but many unfortunate events occured to me.

JaxFRA said:
Of course it doesn't work, the files are not ready yet
I thought I would have done it by now, but many unfortunate events occured to me.
Click to expand...

ah okay, I'll wait until you finish.
thank you

I'm really sorry for the delay, things are quite complicated for me now, but I'll eventually release it

JaxFRA said:
I'm really sorry for the delay, things are quite complicated for me now, but I'll eventually release it
Click to expand...

OK no worries that there is no delay but I wanted to text in french :=)
I am in french but good that they have french
Last edited: Jul 24, 2018

Actually I have a french version, but it's flawed, I have to replace all the english text in the latest version, and that's a painful long work

JaxFRA said:
Actually I have a french version, but it's flawed, I have to replace all the english text in the latest version, and that's a painful long work
Click to expand...

no i found..it should be added text SR Fr in the file folder in CharacterFolders.txt

Nice to see a talented person carry on the work of dialogue creation. Excellent!
T

I must have missed this before, but I gave it a try yesterday, and dude..................... AWESOME work!!! Definitely a 10/10. The bundle was fast and easy to download. I didn't find any issues at all with saves. If I had any problems, I just closed the player, restarted, and everything moved right along after that.

I would have, at some point liked some kind of interaction available. Perhaps like at the end of the game if there were some way to choose the different girls and play with them manually. I think it was Sammoth's dialogues that allowed that at the end of the "Minecraft" story. You could basically just choose the women, and manually play with them with just the dialogue they had in the main play-through of his story. Anyway..... Amazing work!

Thank you very much, I'm glad you liked it


tw1istedsoul said:
some kind of interaction available
Click to expand...

You're not the first one to point that out, I'd have liked that too. But some automated parts of the story are so complex - even if it doesn't seems so looking at the code, changing a single thing could break it all - that I'd chose nothing more complex. The most easy and common way to make CustomAutomation go crazy is when you see that any new position make the girl go brutaly to her initial position, and after that everything goes wrong until you restart flash projector. I couldn't release something like that, it has to be as rare as possible.


tw1istedsoul said:
if there were some way to choose the different girls and play with them manually
Click to expand...

Actually, I thought about it, but knowing myself, I wouldn't have done anything too simple, and that would have required more developpement time. This release was overdue, so I released it such as, but.... it doesn't mean there won't be an update with such feature
For example, providing only some positions to some girl only, because they were designed for specific body types, or providing some automated moves that respect an animtools position boundaries when they wouldn't make any sense in manual mode...

I am currently finalizing the french version that should be released within the week, as well as some corrections and improvements. Among them I'd like to rebuild Tenma's dynamic hair that I'm not quite satisfied with. I'll probably get involved in that manual after game bonuses just after

Oh Ih I'm new here but I always look for new stuff
I read the description must say I'm very curios to see what is this!
Almost three hours? My gawd you worked hard
Last edited: Aug 19, 2018

Sorry how can i put the sounds?

Can you be a bit more specific? I'm very confused with your question

Wow, the most complete dialogue i have seen ! Very very good job... You make a great work with backgrounds, that's very smart idea.
When i have bug i simply activate and desactivate auto-mode and it's done ...
But in fr version the screen stay black after intro of day 5.
You must log in or register to reply here.
Share:
Reddit Pinterest Tumblr WhatsApp Email Share Link
Top Bottom