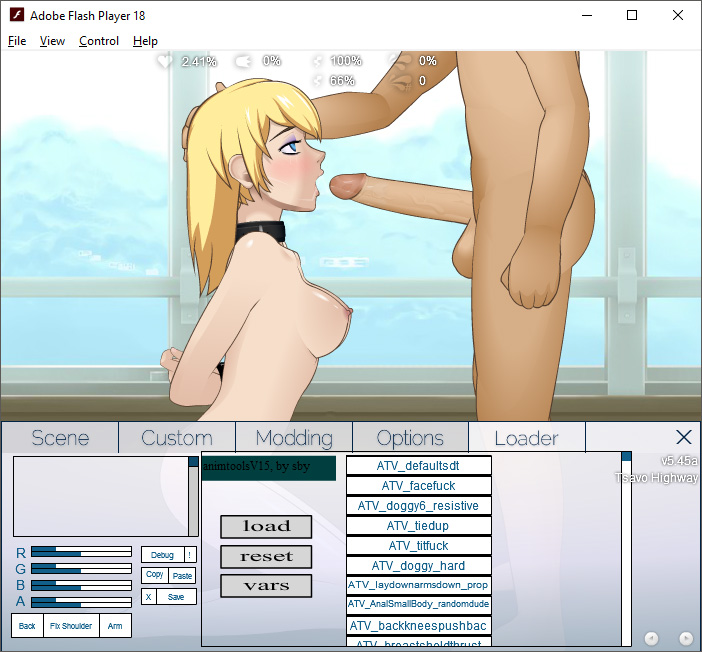 If you're new to SDT then please take a look at the Newbie Guide. It will walk you through some of the common modding activities.

If you already have a SDT folder which includes Loader files, then you can make a backup of your existing Loader.swf file and replace it with the new Loader.swf extracted from this archive. In most cases, this will suffice to give you all of the bugfixes and new features.


-----------------------​
The Loader project aimed to implement various experimental features, sometimes via unconventional coding techniques. Some of these features were subsequently incorporated into the core SDT game.

Mods intended for use with the Loader can be identified by the .mod file extension. The vanilla game cannot use these files, but the Loader can. The Loader can, of course, also benefit from any .swf mods written for the core SDT game (such files are sometimes called "vanilla imports"). It can also load standard dialogue files, raster image files (hairstyle or background), charCodes, and character lists.

In terms of functionality and flexibility, the Loader is a strict improvement over the core SDT game. It has two noteworthy faults: a very minor decrease in framerate due to a few less-efficient code paths, and a significant increase in the complexity of the user experience. The Loader can be very confusing for newbies, which is why we advise users to find a bundle with the most popular mods already installed (such as sby's Loader Pack).

Prominent features of the Loader include:

Users who make the upgrade from vanilla SDT to Loader will notice several semi-transparent numeric indicators at the top of the screen. These are trackers for some of the game's internal variables (such as pleasure and lung capacity). They may be useful for dialogue writers who want to double-check that their triggers activate at the correct moment, and to apprentice modders who wish to start out by creating mods of similar simplicity.

Most users will probably find the numbers distracting. You can disable these mods by omitting their filenames from your Mods\$INIT$\Mods.txt file.

ModGuy 's behalf, because he's been inactive for a while and might not be coming back.

If you'd like to trying using some of the advanced Loader features in your own SWF modding work, then be sure to look through the readme files (and source code examples) which are included in this ZIP package. Once you've exhausted the written material, it's probably better to post your questions in the Loader thread.

ModGuy was always very supportive of new modders, but PMs sent to him at this point might go answered.

The download link is broken :( I couldn't download
Upvote 0 Downvote
How do I put the counters in the game? It's doesn't really tell too much about how to insert it in the game, anybody still around to answer?
Upvote 0 Downvote
porfavor si alguien puede gravar un tutorial de como istalar el cargador sdt le estare agradecido de por vida porfavor un hermano nesesita su ayuda intente siguiendo la guia pero no pue lograrlo solo piensen que aria jesus
Upvote 2 Downvote
No simple way to use the mods you download on here ... Please take some time to stupid proof this. As I have no idea how to use a single mod I've downloaded.
Upvote -13 Downvote
Don't know crap about coding and all that stuff but I do respect you for the time and effort you put into creating this loader to help us fellow humans masturbate epicly.
Upvote 3 Downvote
Way more features than vanilla! Power to the people?
Upvote 2 Downvote
I don't quite understand why the general consensus is that this is four stars. Once you get the hang of this, it's really useful and great to have. An essential mod for SDT. I would rate this four and a half at least.
Upvote 1 Downvote
It might take you some time to understand on "how to" and adjust it with all the mods you'd like. But it is essential and an excellent addition besides many great mods would not work without it.

Thanks a bunch for the hard work on this fine loader, it is much appreciated.
Upvote 2 Downvote
For a person not keen to computer-language, this is totally useless.
Further more; even if you follow the steps, you might run into issues the guide does not explain. I tried making this work for an hour and then I gave up.
Upvote 1 Downvote
too much info on WHAT the program dose, not enough information on HOW to use it
Upvote -2 Downvote
Read more…