Hello, NymphoKyun here ^.^ and i would like to present you a new h-game currently in development inspired by Breeding Season game, Rakuen Iseki no Limulilim, and eluku games 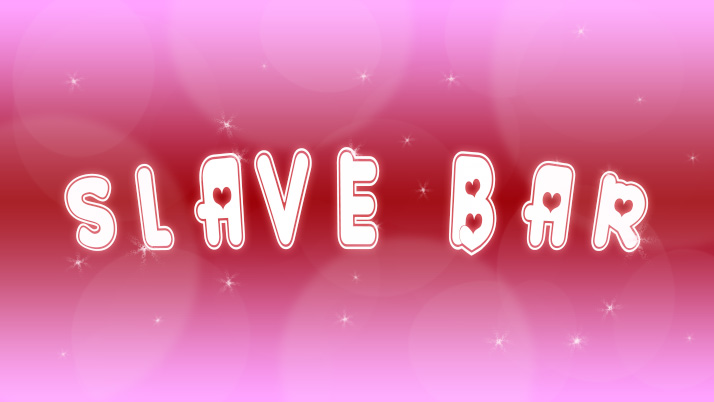 // Story
The story evolves around a human-slave in a world ruled by the noble race of elfs. Our protagonist takes over a bar and transforms it into an h-bar, in which are served dishes made of body fluids (cum,saliva,sweat...). These fluids are collected thru h-acts with the 'ingretient-bearer', the coupling usually is based on the gained/found recipes for the 'fetish dishes'. Apart from taking care of the bar and subjucating deeper into lust your slaves, you'll need to hunt and and tame more slaves (which usually require a special approach described in their recipe).

If this project caught a little of your interest then you're welcome to visit the >> Patreon << page (there you'll find the most up-to-date news and offers >.< )

wow a lot of people doing this adult game development lately, not that i disagree xD looking forward for it :p ill try the demo when i get some time, looks promising

So basically you play as a dick chick??

Kargan3033, Not sure that i follow you.
The game protagonist is a normal human girl
K

NymphoKyun said:
Kargan3033, Not sure that i follow you.
The game protagonist is a normal human girl
Click to expand...

Then how is the Hero/Girl going to breed with other females if she is a female?

Kargan3033, oh, that's what you meant. Well she won't necessarily need to be a parent, there will be males in the game later on.
However sometime in the future i would want to implement futanari feature :3

NymphoKyun said:
Kargan3033, oh, that's what you meant. Well she won't necessarily need to be a parent, there will be males in the game later on.
However sometime in the future i would want to implement futanari feature :3

Ok but I can't say I'm too thrilled with futa, for now I'm not sure about this game but I'll keep my eye on it.

Also if you are open to suggestions have it so you can customize the MC, different colored hair, different outfits and what not.

But this is your game so make it anyway you want.

Kargan3033, Thnx for the suggestions, i'll consider them for future features.
K

NymphoKyun said:
Kargan3033, Thnx for the suggestions, i'll consider them for future features.
Click to expand...

No problem I figured those suggestions would help you to reach out to a wider player base.

Btw what game engine did you use to make this game and is it free to download?, if so is it easy to use?

I'm downloading it and will give it a try and let you know how it goes.
K 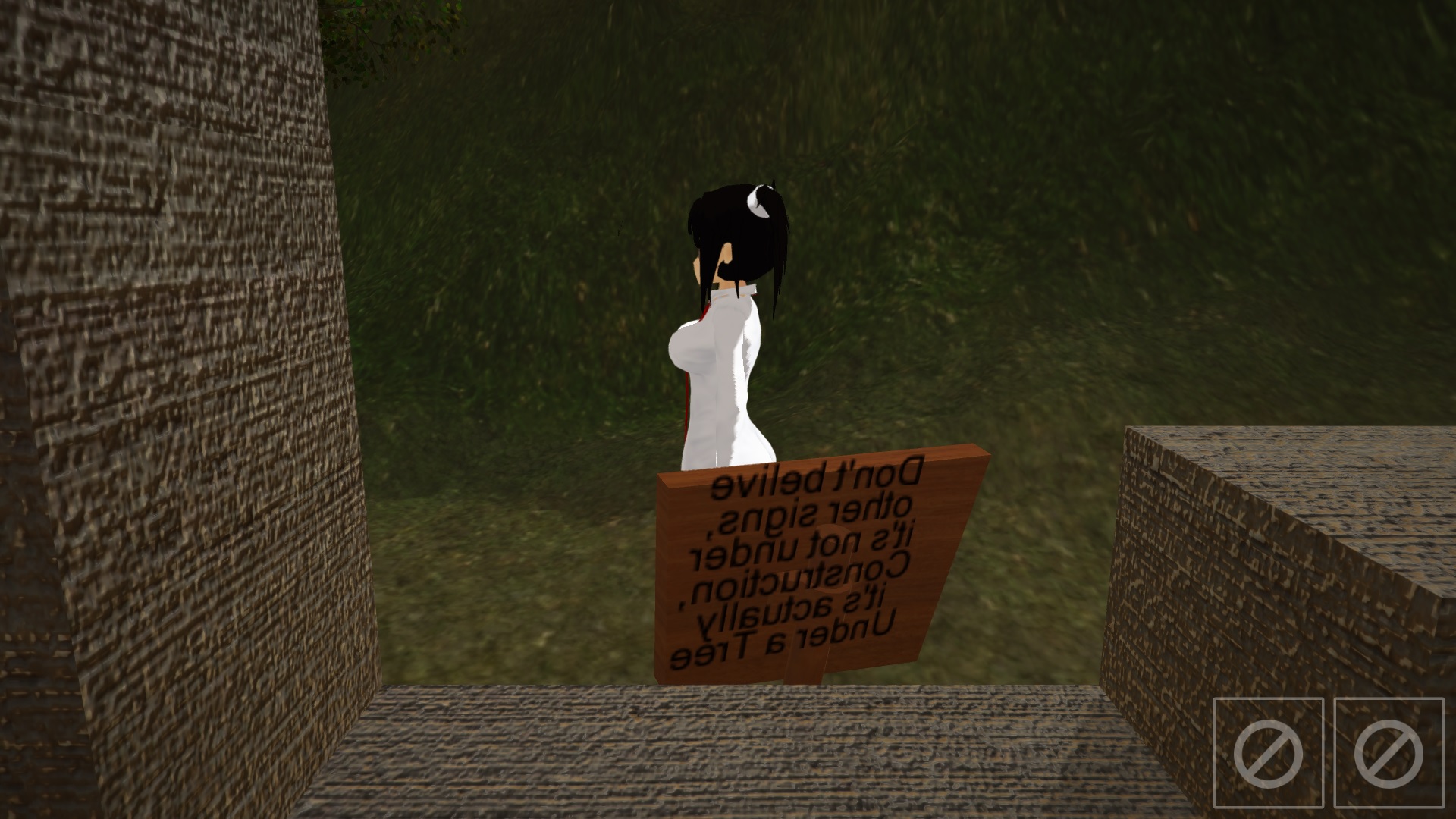 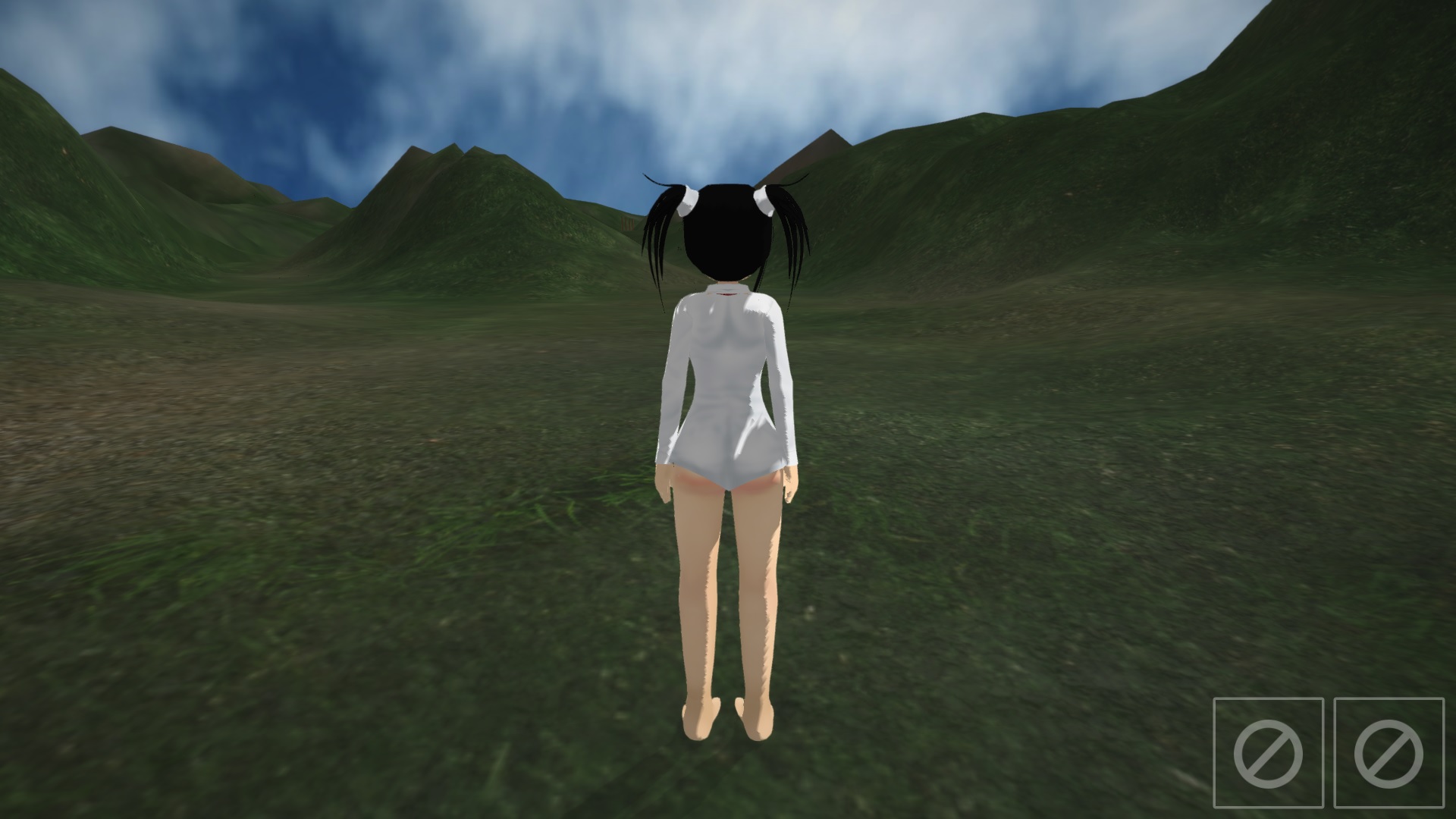 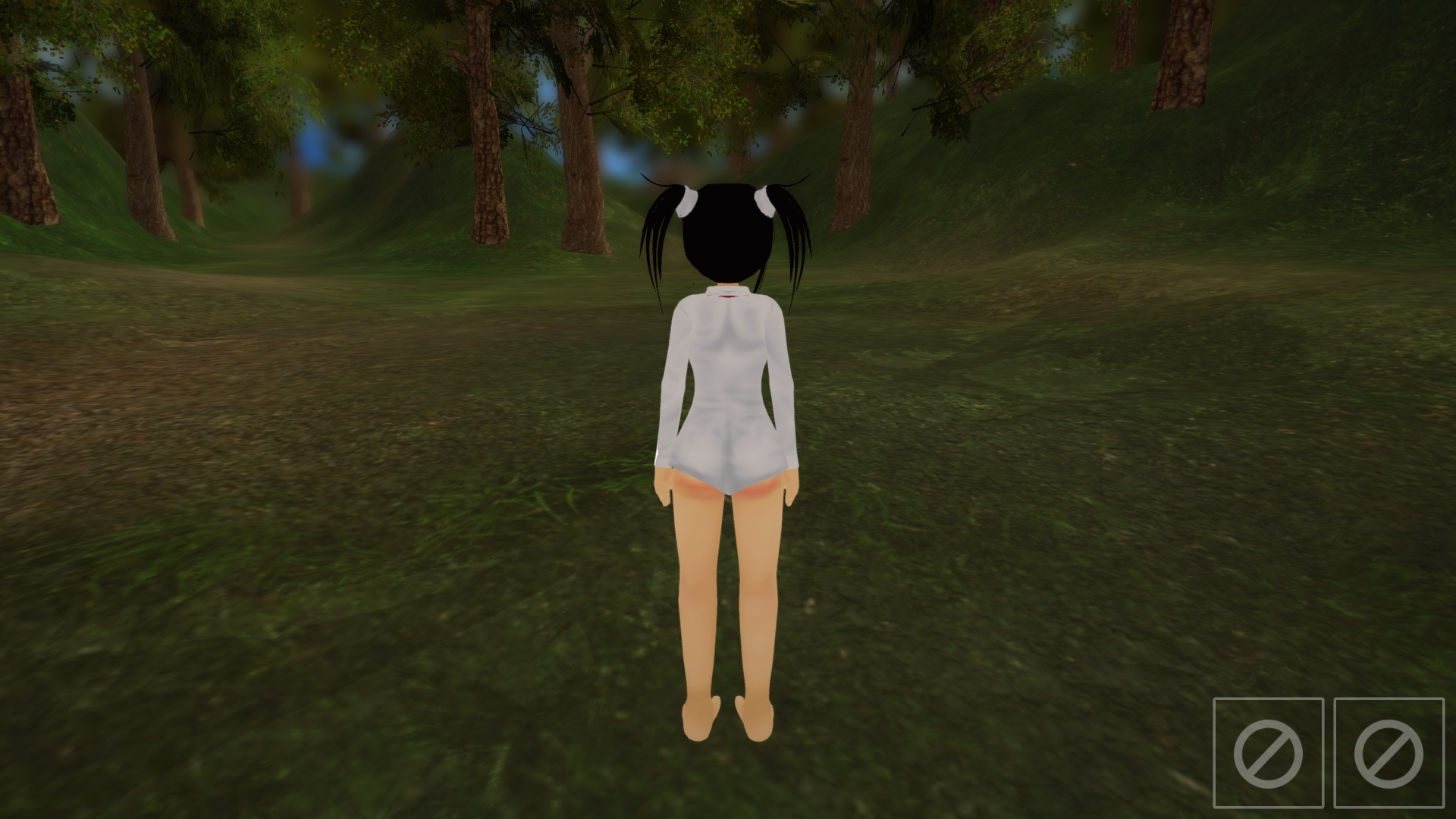 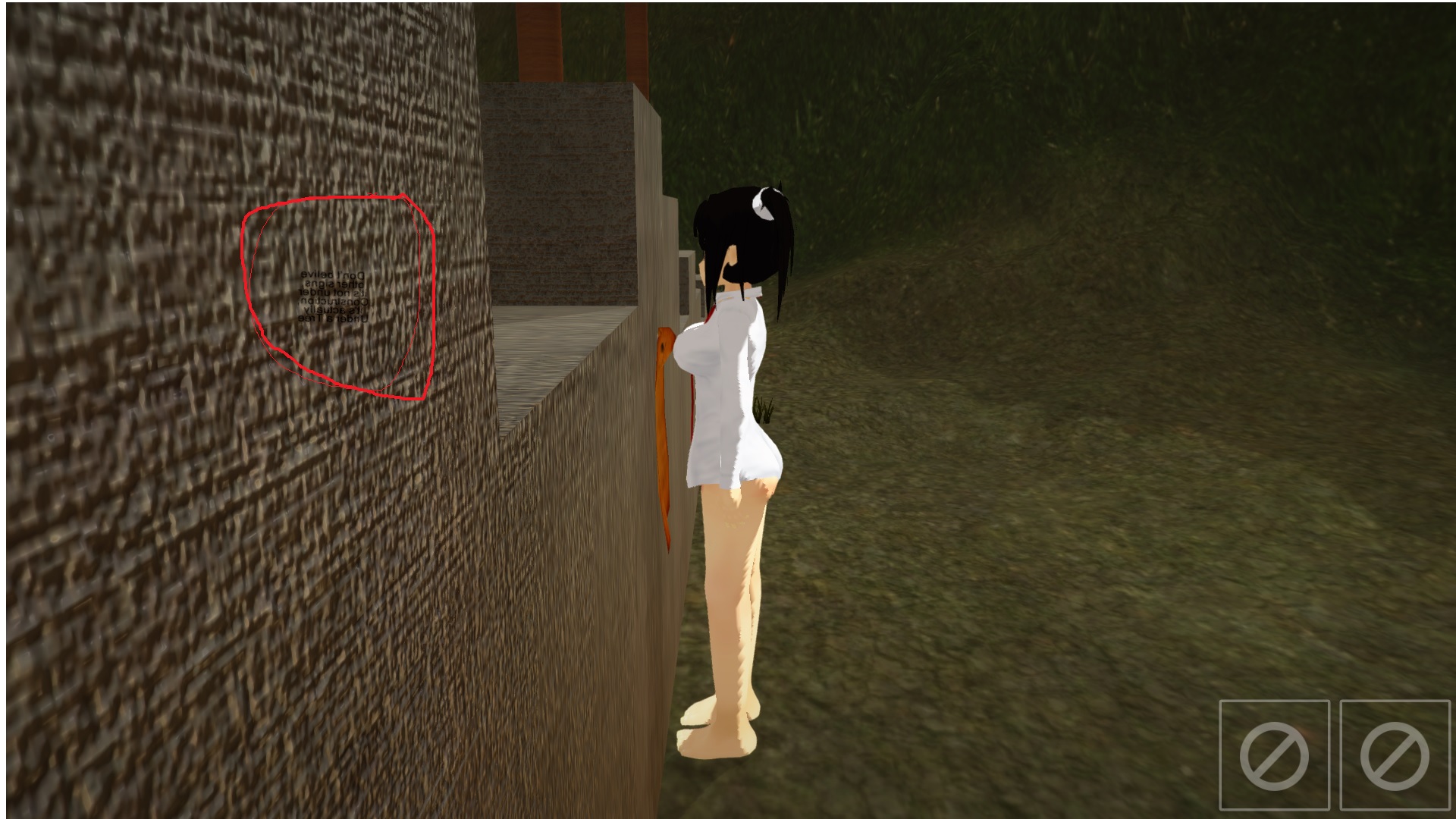 Ok I have played SB a bit and I have to say the walking animation is good and smooth.
The MC design is good and detailed without any mis-textures that I could see.

I found a slight graphic glitch, see the text showing through the wall inside the red circle

Kargan3033,
- I'm using Unity 5 (Personal Use Edition), it's free, and i can't really say how easy it is since i'm pretty much used to it, just give it a try and see. Also you might want to give a shot to Unreal Engine 4 (if you plan any gamedev in future).
- The Text Overlay issue has been fixed (in the current dev version)
- The graphics change behave correctly - that's exactly what should happen :) (this build on it's own was meant to be more of an performance check, since my machine's specs are a bit low)
- Sorry, but no text is supposed to appear at wooden signs, that's only for recipies (or any other small texts). The wooden signs are more of a easter-egg sort of thing

Thnx for the detailed feedback ;) , next version should have the pregnant movement animations (not sure if the pregn-system will be compted tho)
K

Ahh ok then Nympho thanks for the info and no problem, glad I was able to help, I also found that you can use the up, down, right and left arrow keys to move(not the arrow keys in the number keypad)

I'll beta test the game when I can if you like and if you want any more suggestions let me know.

No problem, glad to help and I have a feeling that this will be a good game if done right.

Pretty much all sumemd up above, and about the performance check i can say i got no problem with my crappy laptop beside maybe some tex loadtime for far awa objects. I'm using a 4gb ram dual core un-parked celeron processor so yeah... pretty much in the low end.
I'm also with the different breeder sex, a Male,Female,Futa for the protagonist would be a nice add for diversity purposes and player base, i think i got across similar games in the past (like Slave Maker:Slave Maker Development and i think it was Breeding season, can't remmember if that's the propper name, ill check it later)
both are about training-selling slaves/creatures, maybe you can find bit of inspiration on those, there's even a guy over here developing a UE4 breeding game too, it's called adventureous breeder or something, can't remember right now also looking forward to it. As i said the game-developing community has grown a ton in the last few years, really nice sign imo.

And returning to he topic, does the game have an auto-detect feature for grapic options? so far i had no performance issues but maybe i didn't put the max graphics on and that may change as more stuff is put into it, i didn't really chck that xD dem bunny ran away like 5 times and walking with the carrot in is not very fast, liking the results so far.

Vallil, Thnx for the feedback :)
- About the referenced games - i know about them (actually Breeding Season was this game's inspiration)
- Emm no, there's no auto-detection for graphical optimizations implemented. Only an option to deprecate the current quality (go lower quality).
- The issue with running with inserted carrot is a popular one T.T , it will be fixed when the pregnancy system will be finished
K

I have Slave Maker and Adventurous Breeder, can't say I have heard of Breeding Season can anyone post a link to that game?

Btw Nympho when do you think you will have a new release/update for your game?

The creator of the game seems to have released the game as open source a well as hinting at that he is still working on this game as well as hinting at possible breeding of monster girls, is an rpgmaker game but it is fairly well done so have a look.
Last edited: Dec 8, 2015

K Kargan3033
i can't remember the site i saw it at first but you can find it here too as well as many other nice games https://kimochi.co/
Edit: btw Nympho you could also check the platform, many indie games got there recently
(ie: Malise and the machine, future fragments, some Akabur's games, Breeding season etc.)

Kargan3033,
- Breeding Season - Breeding Season's blogspot (they have public demos there aswell).
- hmm, new game builds are available for patrons every 1-2 months, public release will have to be after those (can't say for sure when it'll be, yet hopefully around Q1 of 2016)
- thnx for the link, i'll check it out ;)

Vallil,
Thnx for the info, although i'm already part of their forums (for half a year or so) >.<
You must log in or register to reply here.
Share:
Reddit Pinterest Tumblr WhatsApp Email Link
Top Bottom