So, I found something interesting, that users of SDT, here might also find interesting.

I don't know if I would say it is worth investing in yet, as there is almost nothing to do yet in the game. The only real difference between the censored and non-censored versions is that the cock/nipples are not blurred (it isn't strong blurring like you see in Japanese Hentai) and you have breast physics (though if you want to see the breast physics, head over to "Customize" at the main menu, to see the fluid breast physics) However, the developer rarely posts on their own patreon or elsewhere for that matter, so they may or may not keep working on it.

This isn't my project, but, I just thought that users might want to know about it, as it doesn't seem that anyone here does know of it's existence.

The Hacker Known As Snow

Also, please notice that this is a free-time project.
Click to expand...

I know right? I know that in some more expensive places like New York, that is a pittance, but it would be enough to go at least part-time with other work and focus more on this project. These pornographic patreon-funded ones, do tend to take off with funding once you get farther, so maybe that is what they are expecting will happen.

Content Creator
has no real relation to konashion's game. To me its just some 'fan made' game meant to cash in on SDT's popularity.

on a similar note, i had no idea that Konashion released SDT v 1.88.8x and

ModGuy released loader v10. some of the features shown off in the thumbnails look familiar too.

sby , did you know about this? also apparently its full name is "Konashion, ModGuy - Mod Loader X / SuperDeepThroat v1.88.8x / Super Deep Throat with plot." Could this be referring to dialogues???

svs-games.com said:
Hey there! Keep2share.cc carries out the action!
Thanks for being a loyal visitor of our site.
We do appreciate that. This is exactly why we give you this Promo Code to use on Keep2share.cc, a great file sharing and download service:
Use this code when you make a purchase to get 10% more days with any membership.
Check this out, you get 3 days for free with a 30-day account, 9 days for free with a 90-day account, and 37 free days with a 1-year account!
Don’t miss out – and have fun!
Sincerely, Site Admin
Click to expand... 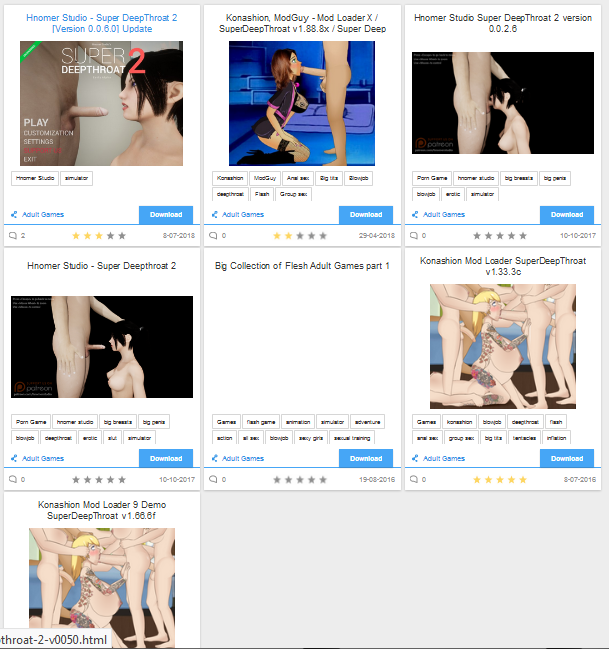 Probably like many paysites. Give you something too good to be true, require you to pay to find out what it is, and once paid, it turns out to be the same game.

Content Creator
i am pretty sure if konashion has released a newer version, it would have been shared on this site within days.
also those version numbers xD
N

Update: As of now they're at least 1 donor away from the $1000 goal. Played this game and it was ok, cannot wait for customisations to come!

Supporter (Tier 2)
Content Creator
Just played the free version of this game. It's not bad, and has a lot of potential. Does anyone know if this game will be released for free upon completion?
N

Should be free upon completion
F

Y’all should check out my game. It will be free lol.