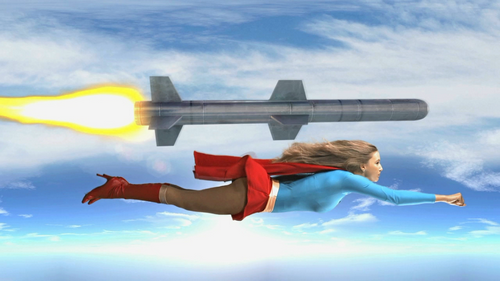 "This world will be mine!"
"Over my dead body."
"Those terms are acceptable."

On Earth, Kara's mission is strictly to observe human kind. However, in violation of planet Nova's prime directive, Kara has chosen to become Supernova, a costumed vigilante with superhuman powers. Unfortunately, Supernova has a dangerous nemesis. Xander is a power mad scientist, who wants to take over the world. In order to defeat Supernova, Xander recruits the help of another extraterrestrial, Kali. Although most mortals can do little harm to Supernova, Kali has a weapon that can destroy her. However, Kali is not the least bit interested in helping Xander. She wants to claim the Earth for her own kind. Always prepared for every contingency, Xander has a weapon of his own that can de-power both aliens. But, before he kills Supernova, he wants to teach her a lesson in humility. There are two alternative endings, one where Xander wins, and one where Supernova is victorious.

No superheroine peril collection would be complete without Bluestone. Bluestone has the usual variety of sexy crime fighters: Batbabe, Superchick, and Wonderful Woman, among many others. In my view, however, their models are usually rather thin, and their silicone implants are more annoying than sexually provocative. Moreover, Bluestone limits sexual content to topless nudity and upskirt glimpses.

Instead, Bluestone places far greater emphasis on homicide. In almost every episode the superheroine is brutally killed by a ruthless villain or a rival superheroine. And the fatality scene is usually sustained for more than a minute, giving us plenty of time to watch the superheroine writhe in agony as she is slowly tortured to death. Strangulation is a popular method, but the villains also uses guns, knives and energy discharges to execute the superheroine.

I could go on comparing Bluestone to other low-budget superheroine peril productions. The fight scenes are well choreographed, the special effects are above average, and the acting is fair. However, what really sets Bluestone apart from the field is something that is rarely used by other producers in this genre, namely a plot. In a typical superheroine peril drama, there isn't much to it beyond the overconfident champion of justice walking straight into a trap and then getting owned by the villains. But, in Bluestone there's an additional level of intrigue. Rather than acting alone, the superheroines are all part of one large community. They usually recognize one another, but they don't always cooperate with one another, and they often confuse their allies with enemies. In fact, we don't know for sure who the mastermind villain really is. There are plenty of self-righteous wannabes like Xander, but there is no clear consensus as to who is really in charge. Although mind control is a common theme, the identity of the ultimate puppet master remains hidden from us.

As for Danica, she's a bit too thin for my taste, butt she does have nice hips, and her acting skills are above average for this genre.