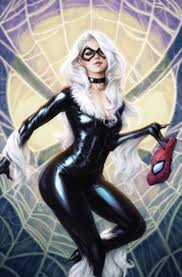 No sound was made as the window to a seventh-floor apartment was opened from the outside. A lithe, graceful figure stepped inside gingerly, her movements all still silent as she closed the window again and walked deeper into the room she had just broken into. The beautiful thief Felicia Hardy was careful as ever, but in her head, she knew that she could handle whatever trouble could come her way. She was sure her sexy figure and alluring features would distract anyone well enough to let her get away with this would-be theft. Her eyes darted around the room, looking for the most likely hiding places for money, jewelry, or other valuable things to steal.

“Ungh!!” A huge sucker punch from behind slammed into the back of Felicia’s head, knocking her to the floor. She managed to roll forward as she landed, and in one fluid motion, she got back on her feet and turned around to see her attacker.

“Well well, big boy. You could’ve saved us both some trouble, and saved yourself from a world of hurt. You just had to do that, and I’m not letting that little cheap shot of yours go,” Felicia said, as she readied herself to attack. Fury was silent; he merely smiled in return and motioned for her to come at him.

The Black Cat leapt at Fury, slashing at him with her retractable claws. Fury deflected it with his forearm, getting it gashed in the process. The thief kept the pressure up, slashing and kicking at Fury and forcing him to remain on the defensive. But despite all the attacks that she landed, her opponent didn’t seem to be hurt even just a little.

Fuck! Nothing’s hurt him yet, dammit! Her frustration bubbled over, manifesting itself into a strong yet careless right-handed slash. This was exactly what Fury was waiting for: he caught Felicia’s attack with his arm and immediately shot his fist into her gut.

“UOOOOOOOOOGHHHH!!!” Felicia’s eyes bulged as her unprepared abs felt like they had just gotten rammed by a truck.

Her body bucked high into the air as two more rocket-velocity fists punished her core. Still holding her arm, Fury followed it all up with a mean backhand to Felicia’s face, knocking her head to the side.
“Guh!”
He immediately pulled Felicia back to him by grabbing her catsuit from between her breasts, forcing her to look up at his face. Then he struck Felicia between her eyes with a brutal headbutt.

“AUGH!” Her eyes immediately rolled up in her head as her entire body went limp while held by Bryan Fury. The psycho cyborg’s lips grew to an uncomfortably wide smile as he let go of the Black Cat. Felicia Hardy dropped to the ground like a rock. Her ears were ringing and her vision was blurring, keeping the beaten woman lying on the floor. Bryan Fury stepped on Felicia and used his foot to roll her onto her back.

“unnhh... “ The first thing Felicia could make out once her vision started to clear was the hulking, grinning figure of Bryan Fury above her. Fear struck Felicia's heart, now that she was well aware of Bryan Fury looming over her. She stood no chance of winning in their fight, and her body was aching sharply all over from the beatdown Bryan Fury handed her. His strength was insane, his bloodlust unhinged, and Felicia knew that if he wanted to, he could lay waste to her without breaking a sweat.

Fury grinned, soaking in Felicia's pathetic begging for mercy. Of course, he wasn’t going to grant Felicia a single drop of mercy - all her begging did was make Fury want to hurt her more. He took Felicia’s hair and yanked her up to a standing position. No, no please n-

“UNNNGHHH!!” Felicia took the full force of a crushing Bryan Fury haymaker straight into her gut. The punch blasted her off her feet and knocked her down on her ass. Before she could even recover, Bryan Fury grabbed her again by her hair, pulled her up, and socked her straight in the gut with another massively strong blow.

“AAAAAAUUUUGHHH!” Felicia cried out as she felt Bryan Fury utterly destroy her with that one strike. He’d effectively ended any resistance that might have been left in her; the pain that radiated from her decimated abs rendered her unable to even stand, let alone defend herself properly. Felicia only stayed off the ground because she was being held up by Bryan’s grip on her white hair. Her arms hung uselessly at her sides; Felicia was too weak to do anything but take the punishment Bryan was dishing out. Bryan Fury drew his arm back, and got to work on Felicia’s abs.

Several tortured screams burst forth from Felicia’s lips as Bryan Fury pounded her poor midsection relentlessly, burying punch after punch that each hit like a truck and destroyed Felicia even further. Her well-endowed chest strained and seemed to jiggle against the tight leather outfit she wore whenever Bryan Fury’s punches hit her. Poor Felicia was nothing but a shapely punching bag now for the savage fighter, her stomach a bullseye for Fury’s assault.

Please, please stop this! Felicia pleaded inside; her vocal cords seemed incapable of producing any sound aside from her involuntary cries of pain. She would not get any mercy from Bryan Fury, however. Still holding her up by her hair, Bryan Fury bashed her face with a strong right hook.

“UGGHH!!” Felicia’s head was rocked to her side by the punch, which left her momentarily dazed with her ears ringing. Bryan Fury let go of her with a rough shove, letting the beaten woman drop to the ground on her stomach. But this wasn’t Fury giving her a break; as soon as Felicia hit the floor, he grabbed her by her hair again and then slammed her face down, hard.

Felicia’s head bounced off the cold ceramic tiles before she finally lay limp, face-down with her arms by her sides. The Black Cat looked done for already, but not for Bryan Fury. He peeled the beaten woman off of the floor and held her up with one arm. Felicia didn’t even seem to be conscious now; her head was facing down as she hung in her dominator’s grasp, and her entire body was unmoving. With his free hand, Fury rocketed another punch into her midsection, this time straight into her solar plexus.

Felicia’s mouth was forced open as air rushed out of her. Her sizable bust bounced slightly from the impact, bringing an amused and sadistic smile on Bryan Fury’s face.

And Bryan kept striking the same spot, forcing more air out of Felicia’s body and making her boobs bounce with every punch. Right now, Felicia was little more than a lump of meat getting pounded and pounded, her boobs bouncing as her body was rocked by Fury’s strong blows. He kept this up a bit longer before stopping and walking over to a couch, throwing Felicia down to it.

Felicia’s voluptuous body flopped limply on the sofa and lay face-down. Her position gave Fury a perfect view of her thick ass that was accentuated by the skintight suit she wore. Fury ran his hand down Felicia’s body, and the heroine was too out of it to even notice. He lifted her head and got a good look at her face; Felicia’s eyes were shut and her mouth was agape. She looked completely dominated and helpless, and worst of all, Bryan Fury wasn’t nearly through with her yet.

Bryan Fury picked Felicia up, got down on one knee, and then placed Felicia's stomach down on his knee so that she lay across his knee. He held the conquered Felicia by her hair, keeping her in this humiliating position with her ass sticking out. Fury his raised his hand high, and-

Felicia was jolted wide awake by the stinging pain from her butt.
"AAAAAHHHHH!!!"
Bryan Fury didn't let Felicia rest, making her scream louder this time with a stronger smack on her ass.

Tears were now streaking down Felicia's face, ruining the heavy mascara that she had on. Felicia's asscheeks were undoubtedly bright red by now, a mark of the torture Bryan Fury had put her through.

Finally, Bryan Fury stood up, taking Felicia up by her hair with him. Felicia's breaths were heavy as her limp frame dangled helplessly off the floor. The poor woman savored every gulp of air as she was finally able to recover from the beating.

Or so she thought.

Fury fired a brutal kneelift straight into Felicia's gut.
"Unnh!!"
He let go of Felicia, letting her fall to her knees before collapsing face-down on the floor. He kicked her to roll her onto her back, then followed her down, straddling her weak body. Felicia was in too much pain to defend herself from what was going to come next.

Felicia's pretty face was battered left and right by Fury's fists. Her arms lay useless and limp at her sides. Felicia could do nothing but take the abuse being poured on to her, her perfect cheeks getting slammed again and again by Bryan Fury.

"AHHH!! AUUUUGH!!"
Two more punches rocked Felicia, hard. She was beginning to pass out, and Fury noticed this. He raised a fist high up in the air before slamming it straight down into Felicia's solar plexus.

"GAAUUUUUGHHHH!!!" Felicia's head shot up as all the air she had was forced out of her in one fell swoop. The feeling of getting the air knocked out of her and combined with the pain from getting hit in that area was unbearable, and Felicia's eyes rolled up as her head fell back down to the floor. Felicia lay unmoving, and painted on her face was a look of utter defeat. Bryan Fury slapped her to get her back awake from her semi-conscious state. Felicia's head lolled around, her dumb and beaten look constant on her face.

A harsher slap than the others earlier met Felicia's face, knocking her head to her side. Fury took her cheek and turned her head to face him. He did the same thing again, slapping her on the other side this time. When he turned Felicia's head again to look at her, her face was now slightly scrunched up in pain. She was finally awake.

Fury stood up, looking down at Felicia below him. Her arms and legs were slightly spread to her sides, leaving all her most vulnerable areas wide open. The brute raised his leg high and then brought it down with all his might as an axe kick straight into Felicia's pussy.

Agony overloaded Felicia’s senses, and her head shot up by itself as she let out an ear-splitting shriek of pain. Her eyes bulged, and then immediately rolled into her skull as her head dropped back down onto the floor.