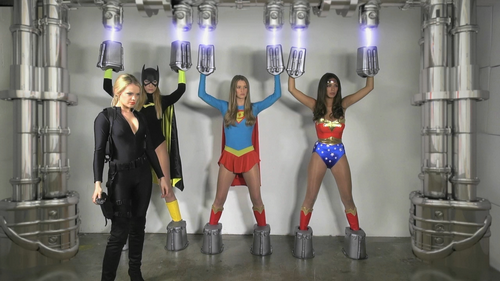 This episode illustrates the mind control concept. Apparently, the villains have figured out how to turn people into remote-controlled puppets by implanting special microchips inside their heads. As a result, all parties (superheroines, villains, and of course the audience) don't know for sure who the good guys are, nor is it clear who (if anybody) is running a chickenshit outfit that's supposed to be an ultamodern, top-secret, highly secure government facility. As for the costumed vigilantes, the fact that the villains have outsmarted them is no reason why they should drop their lofty attitude. Even facing almost certain death, they're too stubborn to admit defeat. As per usual, there are two alternate endings, one where the superheroines meet an untimely demise, and one where Seer comes to their rescue, just before Agent August gets her head blown off!

Nice, loving all the Bluestone stuff coming from you.