Please register for a free account to download
Overview Updates (1) Reviews (2) History
You play as Marcus, a very successful businessman that is about to foreclose on a church when a very tempting offer is dropped in his lap by Aliane, the gorgeous high priestess.

A completed text game with more than 200 page's worth of perverted fun! 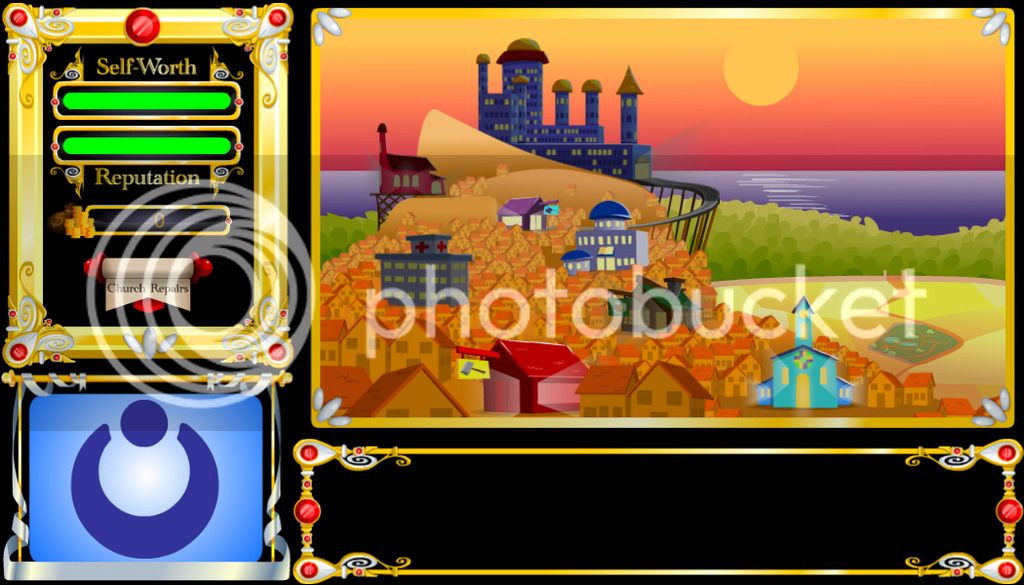 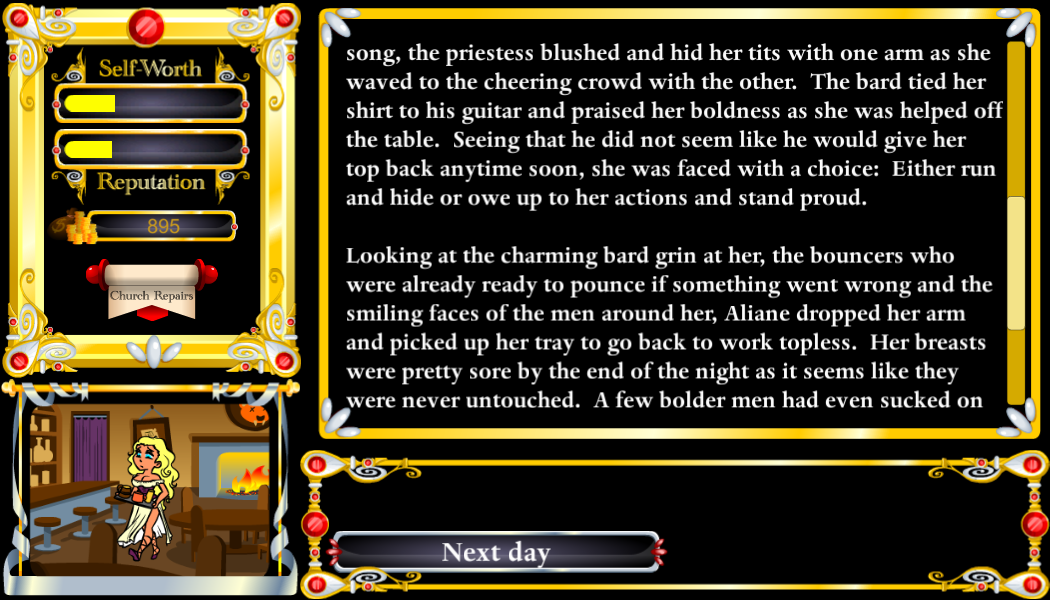 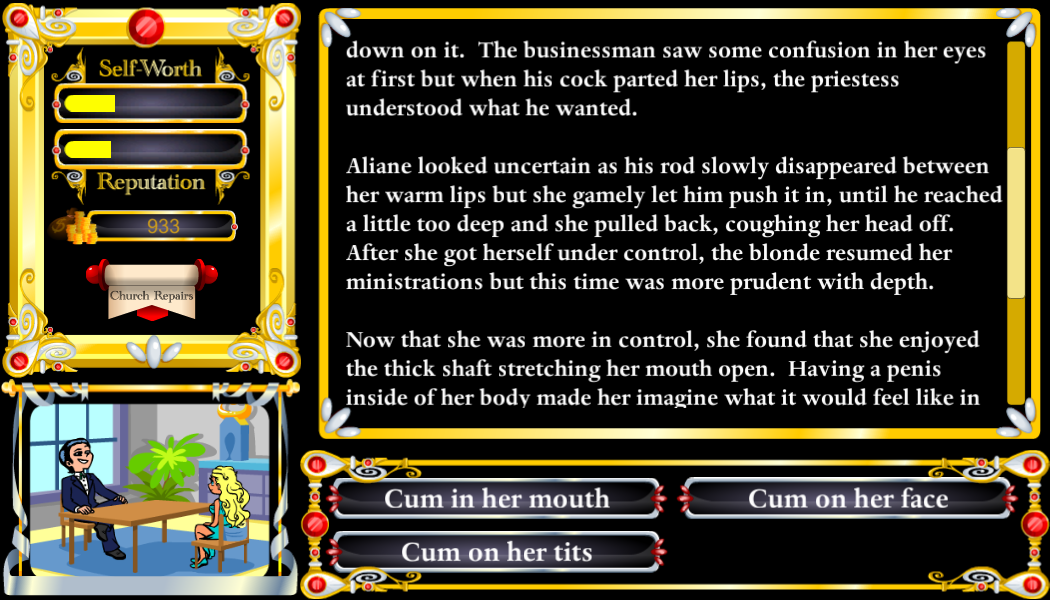 One of the better "Corruption" games I've played to date; not perfect, but still pretty good.

The character-of-interest, Aliane, is also unusually... well, fleshed out for a game like this. True, the whole point of these things is to wear the target down until they're an obedient slave, but Aliane doesn't really "break" so to speak. It's hard to put into words. She's certainly quite different at the beginning and end, but it's more like someone finding out that they have fetishes and slowly coming to accept them than a hostile mental takeover. A good deal of late-game content involving two ladies -- one in a role superior to her, while the other is inferior to her -- actually throws this into sharp relief. Turning the "servicing" of some stranger into a revenge fantasy? Figuring out how to undermine a rival group's reputation with a fundraising effort for them? Throwing a "match" out of sympathy, and because you're kind of into the losing penalty anyway? While the character is surely twisted and -- well, corrupted -- there is never any point where she reaches pure blank slate status. A very specific character is always there, she just... adapts. An interesting take on the "genre", at least as far as I'm concerned.

It isn't quite perfect, however. Progress is made through the game by slowly whittling away at two bars: Self-Worth and Reputation. Self Worth is how much personal pride Aliane has, while Reputation is how much the people respect her. You gradually decrease these by convincing her to do actions that harm her ego or social standing, and can also invest in repairing her church to make her feel more indebted to you and ding the bars further. The lower these bars get, the more options open up and the more morally loose Aliane gets during events.

Easy enough, right? And it is to start off. But this system has diminishing returns. An action that knocks off ten points of self-worth at the start will get less and less effective as you near zero, to the point that eventually everything only dings one point. While probably done this way to represent how steep a fall from purity is compared to a fall from already-pretty-tarnished, it does pose a couple problems. For one there are often several "stages" for each event, with Aliane reacting differently depending on her current bar totals. And almost all of these actions also take off points from the bars whenever they happen. So it is entirely possible to miss one or more "stages" in any given action as she reaches the next level before it's revisited; especially in the early game where everything shaves off big chunks, and *especially* with the events that occur completely randomly during jobs.

On the other side of the extreme, very-very late game is a bit of a grind. As absolutely everything is now only worth one point, shaving off that final sliver of Self Worth can become an ordeal. You will probably reach a point where you have seen all of the final reactions and purchased all of the possible renovations, but still have to go through the motions a few dozen more times to wrap things up. The ending has to be manually triggered once the prerequisites are met as well, so there isn't even much of a reason to have a "buffer zone" at this particular stage.

World recommend. Not to anyone, of course, but if you're here reading this then probably to you.
Upvote 0 Downvote
Neat game. Well-written, with a reasonable balance between narrative and gameplay. You'll need to repeat some actions in order to advance the story, but there's some variety in the outcomes. It doesn't quite reach the level of Slavemaker (in which you're eternally "grinding" the same daily actions in order to improve stats). And if you DO find the actions boring or repetitive then you can quickly skip through them until you unlock a new interaction.

It looks and feels a lot like a Flash game, but it was actually written in Unity. As a result, the UI is a bit more responsive than you might expect. The game is also fairly "light" on graphics and sound. It has a complete UI, and its portraits and animations are sufficient to "set the scene" ... but they're not enough to actually explain the story. You'll definitely need to read if you want to play the game effectively (or understand what's going on).

My only real complaint is that the text window is too small. The game often presents long pages of text, but only 1-2 paragraphs can be seen at a time. I'm forced to scroll more often than I would like to -- I CAN'T just sit back and read, which impairs my immersion somewhat. This aspect of the game compares unfavourably with Fenoxo's games (which have clearly been "optimized" for uninterrupted reading).

It MAY be possible to ameliorate the text/scrolling issue by reducing the text size (or expanding the game window) but I couldn't find any options to do so.
Upvote 0 Downvote
Read more…