Nearly finished moving and with good internet now. Saw Atelier Ryza earlier. I'm more of a Klaudia fan myself. I like how break is not cured on hit but it seems like there is no special lines for getting hit while under it like the other Atelier games. The status started in Shallie In terms of modern Atelier games which is coming to PC in a trilogy pack. I just don't like playing on PC for some reason so I would have to double dip to be able to tweak these games. Put some stuff up on King's Raid.

Zaysha I've done it in the past but recently I haven't been getting many characters I want through the 'friend list' character thing, I kinda like doing multiple characters at once with the boss specifically on stage 2-9, if it's with the bees then yeah I think one character at a time is best, I haven't gotten far enough into the game to change difficulty yet (but i think stun rates should still be the same I'm pretty sure), also stage 10-4 (has a boss that's pretty much a stun festival in a sense, 4 bees at the same time, boss has an 100% chance to stun a random character every turn, if bees are killed from counter attacks/normal attacks anyway, the boss will revive them relatively quickly), problem is, because the level is pretty late-game, new characters at low levels will barely survive any attacks to get stunned enough before dying.

oh and it's up to you to redownload it if you want, idm, but because you've already done a lot on your channel then redoing it all over again just for better stun close-ups and camera angles is probably a bit of a hassle, you could maybe do it when you don't have many more new videos planned, atm I'm alright doing the videos myself, relatively easy with the iphone screen-recording button.

Oh I like Klaudia also! And Shallie I loved that Break had unique animation. Sad I lost my recordings of that one. >_< I have posted some things on my Twitter from a few rando stuff, also uploaded the gifs to the mega folders. I did some pictures of Samus and Zelda also. Maybe I will do a bit more if I can figure out way to move files from my switch...

Any files you see me upload to twitter also get put on the mega drive btw and sometimes extras.

I saw the vids of GateSix and it looks like it has stun animation but not very common? In the one of the pop idol she gets “shocked” very shortly and it looks like a stun...I look forward to more ryona stuff here.
Last edited: Oct 30, 2019

damn the artwork indivisible is so great! A very big and kind of attractive lady? An Asian girl with INSANE legs but no arms? This game is definitely something else!!!!!! BTW for the gif you posted, are those real stun animations or are they just low hp? Is there a real stun in this game?
Click to expand...

Ohhh forgot to reply to this YESS lot of variety of characters! There is no stun status but my fav ryona character, leilani, actually does get dizzy when she does her big spinning attack. It’s not quite my kind of “stun” but she’s still very cute~ I did gifs of all their low hp animations, will try to also show ko poses.

Found some videos for an old game: Orcs must die 2

This game used to be my favorite ryona material. The stun animation is great, the sorceress is really attractive, and I loved the art style a lot.

Orcs must die Unchained used to have the same stun mechanics on more characters. Unfortunately, they later removed the stuns and now when you get hit by the ogre you are only slowed

I just can't seem to catch a break these days...
- Do you guys know if Legend of Legaia (PSX) had stuns... I feel like it didn't.
- I messed up on the filename, it's Riddel not Riddle.
- Hatsune Miku is the new event in Overhit (Mobile), waiting to see someone has her as their main in the friend section... still missing the URs and SSR+s

Epic 7's JP version is coming out in two days, which means there will be a lot of new voice content for those interested.

Will have more later on today...
- really, epic 7 is getting a jpn release... that's kinda late for them
- Crossing Void (Mobile) came out but it just seems to be the same animation of the ps3 game 'degenki bunko climax fighters', not sure I'll keep playing this game, it's pretty large in size on my phone

Overhit animation is as good as always

Here are more from Chrono Cross... I think I did ever female except for Spriggan and that plant flower girl?
- Lyn the Lightbringer (Mobile), I'm just missing 4-5 females now... I did a crap ton last night because before I went to bed it said there were 6 hours left of the event and I was like... f---, no sleep until get this done. Did my best with the back & (tried) front stun, but some characters were difficult to do due to the fact I don't really play the game anymore... couldn't get the downed hit for some of them.

The same taste yet again huh? That's cool. A couple more Epic Seven stuns. Wonder how long until the Japanese voices are added to the other servers. 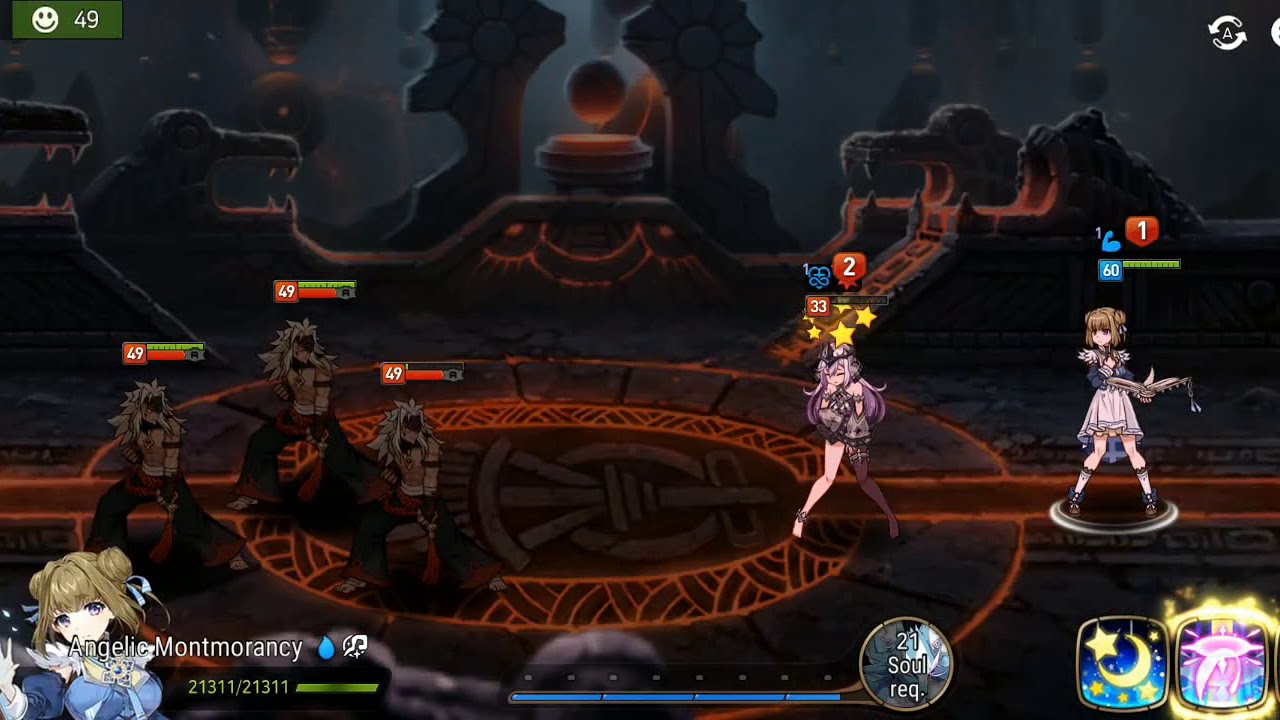 ohhhh thanks!! I gif’d them, added to my twitter and to the mega folder.
I am thinking smash videos might be possible with the replay to video feature? not sure, I want to look into just to have good quality vids that won’t disappear from youtube.

even tho smash bros ultimate is for good boys and girls heheh ;3

Here is what I believe the girl with best stun animation among the new heroes (probably tied with that pantyhose big boob girl :))


Rant: Epic 7 has the worst stun animation of all games.

Wow, that is good quality! How did you make it?
Ah man I love Epic7 stun animations, they have so much fluid motion and variety of poses.

Ryonaneer I was recorded on bluestack as before. But it's just really painful for me to stare at the big flashy graphic of Epic 7 on the big screen of the computer while recording it. Looking at it for too long and I'm getting a bit of nausea.

I really wish to redo that new pantyhose mage girl in higher quality, but after trying to stun her in the arena a few times I got no luck. And I really began to feel uncomfortable staring at the flashy big screen, so I gave up :(

There are all the sprites and some insane artworks for the characters. Ok Amazon warrior... :):)

Haha, no way that is all the sprites in that game, but it does show a lot, including most ryona poses for Sorceress, because ofc it does for her. xp

Trying to update my computer, now when I try to boot xenia it gives me an error about vulkan not initializing? Going to try to finish updating the new OS, see if that works...

Also going to try this week to get more bits of ryona for Individible and smash.

That sprite looks very weird to me because I am having trouble seeing how the right arm is connected because of the jacket flowing in and out. It should be hitting the upper arm and rolling/folding by hitting it. It just *shivers* looks like a floating lower arm to me.

Anyway, for Knights Chronicle, if it's in portrait mode, you get somewhat half body shots, but landscape mode gives you the full body shot (which I'm kinda more into). I am annoyed that the stars stay at the same place not matter how short or tall the character is...