A costume and static hair for Jihl Nabaat from FFXIII.

Edit: I have updated the reference to be a better angle for the costume. It's a little blurrier than I would like, but it's hard to get a better 90degree image of this character. I have removed the commission offer, as I was informed it's not seen as a good thing here.
Last edited: Sep 17, 2020

As the ref is not showing the girl exactly from the side (i.e. 90°), the costume need sto be redrawn entirely, that makes the request very unlikely to be fulfilled.
Also they are not anime style refs, meaning that the colours need top be adjusted and all the shades redrawn.

Try to find anime style refs showing her exactly from the side, preferably kneeling, because long skirts and dresses are a pain in the arse to draw.

I have updated the ref. I'd ask for this to be moved back into the normal request area (if, of course, it is valid this time.)

SyntaxTerror said:
they are not anime style refs, meaning that the colours need to be adjusted and all the shades redrawn.
Click to expand...

This ref is worse than the former one (that you should not have removed, all material can be useful), its resolution is too low and it's full of compression artifacts.
Also, it is not possible to see her shoes.

Read carefully the Reference Shot Guide, Tips for requesting clothing or outfit and Requesting Rules to see what is needed to make hair and costume mods.

Fleet would say that it is not meant to be mean, but I don't.
I assume that mature people understand that being mean is rather not answering at all and leaving them with their undoable requests.
It is not mean either to write extensive guides to help requesters to find usable material, so don't be mean and read them attentively.

I have no idea why this hostility is necessary, but it was precisely *because of reading the guidelines* that I removed the previous ref after you informed me it was invalid.

" Do NOT post useless pictures. It will NOT help anyone and NOONE is interested in it. It's just annoying. " (via Requesting Rules PLEASE READ BEFORE POSTING A REQUEST (tl;dr) )

If you tell me that references are poor enough to warrant invalidating a request, in that context it seemed better to remove it and try to find something better. I would provide anime-style refs if they were available, but for this character, there are none.

I was fully aware when I posted this that the refs were far from ideal. It is not always possible to obtain perfect refs, especially in this case, so I posted it in the knowledge it would likely go unfulfilled.

antsstyle said:
I have no idea why this hostility is necessary, but it was precisely *because of reading the guidelines* that I removed the previous ref after you informed me it was invalid.

" Do NOT post useless pictures. It will NOT help anyone and NOONE is interested in it. It's just annoying. " (via Requesting Rules PLEASE READ BEFORE POSTING A REQUEST (tl;dr) )
Click to expand...

I never said to read that thread, this is a bad summing up that

Rudgar decided to do on his own, and that

fleet decided to leave after the three of us discussed the pros and cons of it.
Rudgar is part of the "Content Creators" cos he uploaded some animtools positions, be he's not a modder and never had to draw a mod using references.

Huitznahua drew many mods, so did

stuntcock and I, so I guess we know what we're talking about, that's why I gave you the right guides to read:

SyntaxTerror said:
Read carefully the Reference Shot Guide, Tips for requesting clothing or outfit and Requesting Rules to see what is needed to make hair and costume mods.
Click to expand...

They may seem long, but everything has been added carefully to them to explain as best as possible what is needed.
Frankly, taking 10-15 minutes to read them is nothing considering the time needed to find usable references (it sometimes took litteraly hours for me) and it is nothing considering the time needed to redraw completely over a bad reference compared to the time spent with a good ref.

In the rules, stuntcock wrote:

stuntcock said:
You may include non-standard images, but you must try to find anime-style fanart as well. If you fail to do so then your Request will be much more difficult to fulfill; it will probably just be ignored.
Click to expand...

This is the first mod I've done, and I used it to synthesise what is expected from a reference: 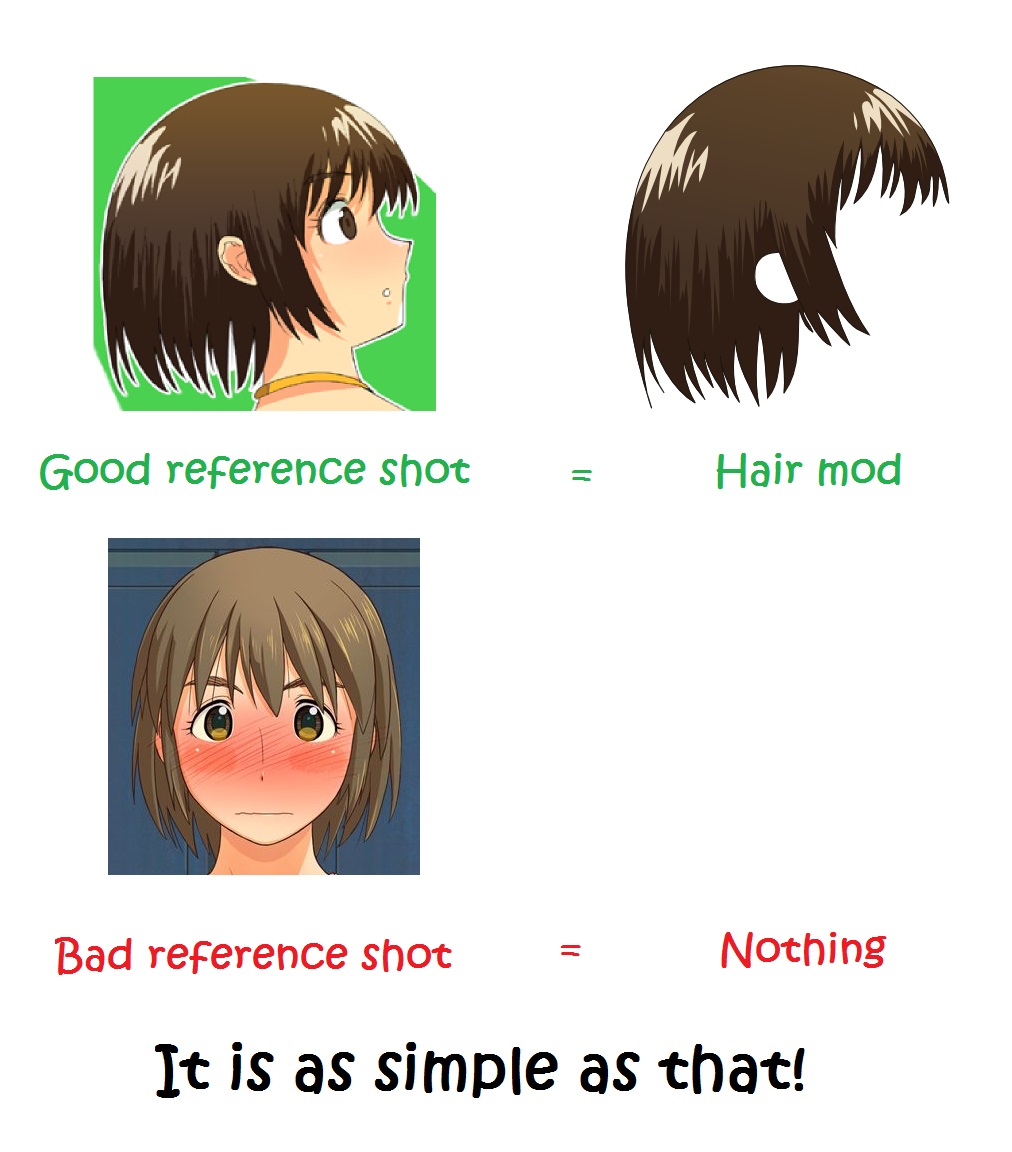 It is very easy to trace over an anime style reference showing the character exactly from the side, that is what modders do usually, because we are not artists and most of us cannot draw anything as good as real artists.

If you can understand this, you'll find the good references so a modder may give a try to draw a mod for you.
If you can't, you're just wasting your time along with modders' and moderators' time.
You'll understand that some mods cannot be made because there is just no suitable references for it to happen...

And frankly, most modders are fed up with lazy requesters that can't be bothered to read the rules and guides (that weren't written in five minutes), even after being told to do so multiple times, and come up with shitty refs, then get upset because nothing can be done, and because they're told what is not right with their refs.
Also, guides were written to learn how to make mods, reading them have teached many modders here to make mods, and experienced modders are always ready to explain things to novices that want to learn, so there shouldn't be any problem with requests in my opinion.

Yes, I accept that. As quoted in Stuntcock's guide, requests are "much harder" to fulfil without the correct references, not "absolutely impossible and forbidden". I understood that before I posted the request; I posted it on the off chance that a modder might be able to do it, but I was well aware that given the lack of matching styles and imperfect reference material, it was very unlikely to happen.

Obviously, if perfect refs are obtainable then this must be done by the requester, but this is not always the case. Given SDT's age, most anime characters with perfect 90 degree ref images and matching styles are likely to either have been requested already or have no more interest, so it's likely that more and more requests will be part of this much more difficult "not feasible to find perfect refs" base, especially for costumes. For hairs, less so.

To be fair to you, I can understand why on first sight it might seem like many requesters such as myself are simply not reading the rules, but I would say at this point that there are probably a lot of times where it's not the case. Rather it is more of a problem with the actual availability of refs for many characters, as the requirements are very stringent (understandably, but nonetheless). It was for this reason that I posted Synonymous' mod as an example, as it is a character from the same series reinterpreted in SDT's style, to try and help show what reinterpretation would be needed.
You must log in or register to reply here.
Share:
Reddit Pinterest Tumblr WhatsApp Email Link
Top Bottom